It took us almost ten years to get an Alpina onto the Fast Fleet. Now we have two... 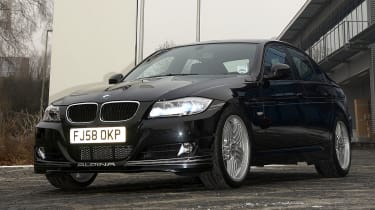 It took us almost ten years to get an Alpina onto the Fast Fleet. Now we have two and somehow I’m custodian of both. Lucky or what? The overlap will be short-lived, as our 1998 LPG-powered B10 V8 will soon be on eBay, but it’s a great opportunity to see the contrast between old-school Alpina and the new philosophy ushered in by the D3.

A decade ago Alpina took top-end BMWs and re-engineered them with more power, bespoke luxury and a price to match. It still does that today, but it also works its magic on some more humble models. The D3, for example, is based on the 325d SE, with the straight-six diesel engine ditched for the twin-turbo 2-litre four-pot one normally found in the 1-series. The result is improved performance (power rises from 194bhp to 211, while the 0-62mph time is slashed from 7.4sec to 6.9) and improved economy (the combined-cycle figure climbs from 49mpg to 52). The suspension gets a comprehensive makeover too, with Alpina having raided various M Power and 335i parts bins before adding its own springs and a set of very tasty 19in wheels. Yet despite all this work the Alpina D3 Biturbo costs less than £3K more than the 325d SE (£30,950 plays £28,185).

It’s an intriguing mix, so when the guys from Alpina’s UK distributor, Sytner of Nottingham, suggested we add one to our long-term fleet we didn’t have to think hard before accepting their generous offer.

The D3 comes in all forms – coupe, Touring and saloon – each with a slightly different suspension set-up. Following the logic that the M3 is a more complete dynamic package with four doors, we ticked the box marked ‘Limousine’. Black paint was chosen along with contrasting silver stripes, and to complete the look we opted for Alpina’s ‘Dynamic’ alloys, a modern take on the original 20-spoke ‘Classic’ design we have on the B10. There was one final request, and that was to be able to collect ‘our’ car from the factory in Buchloe, Germany, giving me the chance to nose around the place, get to understand the Alpina ethos a little better and then run the car in on the drive home.

That’s why, early one morning in January, photographer Chris Rutter and I found ourselves stood outside the showroom at the front of the Alpina factory, looking through the plate glass windows at our new car parked next to the reception desk. It looked as good as I’d hoped, the lower springs and slightly nose-down attack angle giving it an aggressive stance, the distinctive wheels filling the arches beautifully and the Alpina front splitter adding further muscle tone.

When I eventually managed to tear my eyes away, Alpina’s effervescent sales director Kris Ordwarka took us out back for a tour around the collection of buildings that demonstrate just how much the company has expanded since it arrived here back in 1970. This wasn’t quite Alpina GmbH’s first home. Back in the mid-’60s, company founder Burkard Bovensiepen began producing tuning parts for the BMW 1500 in a corner of the Alpina mechanical typewriter factory owned by his father in nearby Kaufbeuren. When imports of Far Eastern electronic typewriters killed his father’s business almost overnight, Burkard took over the name and a legend began to take shape.

BMW was immediately impressed by Bovensiepen’s products and a close relationship started to evolve. This was further cemented by the huge success Alpina achieved when it began racing. Its cars won the German and European Touring Car championships, as well as prestigious events such as the 24-hours of Spa. All the top names in the sport raced for Alpina – Lauda, Hunt, Ickx, Bell, Ertel and Stuck were all employed at various times – while Alpina also carried out all the development for BMW’s 3.0 CSL.

Road-car manufacturing was where Bovensiepen really wanted to be, though, and in 1978 Alpina launched the B6 2.8, the first ever 3-series to feature a six-cylinder engine. It’s fair to say that neither Alpina nor BMW has looked back since. Their relationship has become ever-more intertwined over the years, to the point where the D3, for instance, is built on BMW’s production line and only arrives at Buchloe for finalisation and a test drive (the odometer is then reset to zero, so every new owner drives away with the display showing 0.0).

After wandering around the workshops and trimming rooms, we were invited into one final area before we hot-footed it to Calais – a huge cellar packed with imported wines. Bovensiepen has been importing for as long as he’s been playing with BMWs; apparently it’s more profitable too. After being shown the oldest bottle in the place, produced in 1727, we were recommended a Parigot & Richard sparkling rosé (which was superb).

We could have stayed all day, but it was almost lunchtime and we still had a 600-mile run to the Channel Tunnel. It would probably have been quicker to head directly to France and whiz up the autoroutes, but I felt an autobahn blast that skimmed the edges of Hockenheim and Spa would be more appropriate. It was suggested that we keep the revs below 3500 for the first five hours, but as 100mph arrives at 2900rpm that didn’t prove much of a hindrance.

First impressions after that initial journey are that the D3 is a great all-rounder. Its engine has the flexibility and characteristics of a petrol unit (while scoring over 40mpg so far), and the ride is composed and comfortable on a long cruise. I arrived home deeply impressed; it’s hard to imagine getting off to a better start.