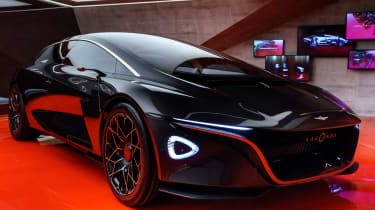 Aston Martin continued its ambitious development at the Geneva Motor Show with its bold Lagonda Vision Concept. The sleekly designed luxury saloon features an all-electric powertrain and is aimed to give a taste of what buyers can expect when the first Lagonda models go on sale in 2021. The Vision Concept was displayed alongside a pair of 40 percent scale models previewing the SUV and coupe models that will mark Lagonda’s production return.

Bosses claim that Lagonda will be the first luxury brand to offer a purely EV line-up of cars. The high technology will also extend to the extensive use of autonomous driving technology, plus the use of the latest lightweight materials.

The two forthcoming Lagonda models are cars six and seven in Aston Martin CEO Andy Palmer’s seven cars in seven years plan. Based on the new platform that will underpin the forthcoming Aston Martin DBX SUV, both Lagonda models will feature solid-state batteries located beneath the floor with four electric motors – one for each wheel – with each one able to independently deliver between zero and 100 percent torque for true torque vectoring. 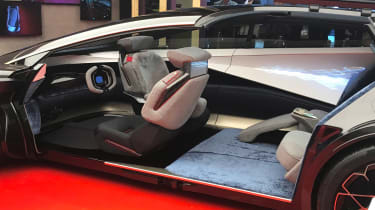 Chief Creative Officer Marek Reichmann and his team of stylists and engineers have used the car’s electric underpinnings to create a shape that veers wildly from the usual three-box luxury car template. Lower and shorter than more traditional models, such as the Bentley Mulsanne, the Vision features very short overhangs and an almost coupe-like profile. There are some eye-catching flourishes, such as the rear doors are not only hinged at the back, they also open in tandem with panels in the roof, offering occupants much easier access. The proportions are said to rival those of a Rolls Royce Ghost externally, with the space and luxury of a Rolls Royce Phantom internally.

Arguably, it’s the Vision’s interior that’s the star of the show. By mounting the battery packs in the floor and the electric motors in the wheel hubs, Lagonda’s stylists have been able to make maximum use of the space. To this end, the front seats not only slide back and forth, they also spin through 180 degrees, allowing the driver and passenger to face those in the rear. There’s also a totally flat floor area, while the materials used take their cues from contemporary furniture and fashion. For instance, English furniture designer David Linley was enlisted, leading to the use of materials such as carbon fibre and ceramics, as well as more tradition wood and leather.

Both new Lagonda models will be built alongside Aston Martin’s the DBX at the company’s new St Athan factory in south Wales with the first deliveries scheduled for 2022. The five other cars in Palmer’s seven year plan are: the DB11, the new Vantage and forthcoming Vanquish replacement, the V12 mid-engined Ferrari 488 and McLaren 720S rivalling supercar and the Valkyrie hypercar.