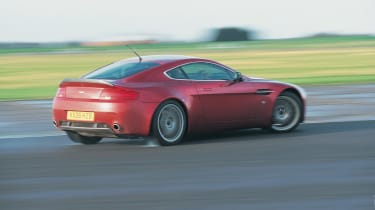 We’ve been itching to try the definitive version of Prodrive’s Aston V8 Vantage on the road and around Bedford Autodrome’s West Circuit since we got involved in the development programme late last year (see evo 101). Now, with the first demo car back from its debut at the Autosport show, it’s time to have a good old scratch.

First a quick recap. With a successful GT racing collaboration under their corporate belts, there was an obvious connection – and plenty of mutual respect – between Prodrive and Aston Martin. Already well known for developing countless incarnations of factory-sanctioned Performance Packages for the Subaru range, not to mention the dynamically re-worked Mazda RX-8 PZ, it was logical that Prodrive’s ambitions should extend to enhancing the V8 Vantage. So with the factory’s blessing, Prodrive embarked upon developing a range of post-registration upgrades covering the engine, chassis and aerodynamics, all of which would be sold and fitted under the Prodrive banner.

It was the latter stages of this development programme that were involved with before Christmas, but due to the nature of testing and development we never got to drive the finished article, complete with aero package and lightweight 19in alloy wheels. So apart from ogling it at the NEC in January, this is the first time we’ve had access to the completed car.

The finished article looks as good in the metal as it does in pictures, but the enhancements come at a price. Perhaps not a price that your average Aston owner will blanch at, but pretty chunky for those of us not on six-figure City bonuses.

More power is perhaps the easiest of all commodities to sell, but at £6239 including VAT and fitting, the remapped ECU, high-flow sports catalysts and driver-selectable exhaust system need to deliver every one of the promised 425bhp and 325lb ft (up from 380 and 302 respectively) if they’re to warrant the investment.

Likewise the £5581 suspension package, comprising driver-adjustable Bilstein dampers and Eibach sports springs, and the £3995 19in forged-alloy wheels – 8.5in wide at the front, 10in at the rear, and wearing bespoke 245/40 and 285/35 Pirelli P Zero Corsas – need to yield significant dynamic improvements, not to mention fit your vision of what a V8 Vantage should look like. For the record, we think the rims look great, especially when viewed in conjunction with the carbonfibre aero package.

At £2937, the front lip and tailgate spoilers are probably the easiest items to overlook, but with a 45 per cent reduction in high-speed lift they perform both practical and aesthetic functions.

Our plan for the day is to meet at Bedford Autodrome, do some laps and get some photography in the bag, then head out onto some great local roads. But before the fun can start we’ve got to pass the Autodrome’s dreaded static and drive-by noise tests. We decide to measure the switchable exhaust in ‘noisy’ and ‘quiet’ modes (there’s also an ‘active’ mode). Uncorked it hits 101dB on the static test, which is so raucous we’re not even allowed to attempt a drive-by. However, in quiet mode it barely registers on the static test and struggles to reach 83dB (against a limit of 87dB) on the drive-by. Try that in your 997 GT3.

The downside to running corked is that it partially snuffs out the hard-won top-end power gains, but the ability to put in some laps rather than mope around the pit lane far outweighs the slight reduction in performance.Thanks to the weather the track is evil: big patches of damp at the worst possible mid-corner positions, and a cold wind that must be driving temperatures down towards freezing. Consequently we won’t be setting any lap times as hoped, but we decide to make the most of the track time before we’re engulfed by the approaching hail and sleet.

We start with the Bilstein dampers in ‘normal’ mode. The Pirelli tyres take a while to find some temperature, and the first few laps are skittish affairs, but soon the rears begin to warm with the effects of 425bhp (actually more like 415bhp with the exhausts corked), then eventually the fronts begin to find some bite too.

Like the standard car, there’s more body-roll than the firm set-up leads you to expect, but the chassis copes well with the nasty conditions, managing to find a good balance of grip, decent traction and progressive breakaway. However, as the track begins to dry and corner speeds increase, its noticeable that you need a couple of bites at the wheel to contain any oversteer slides that develop.

Switching the suspension to ‘sport’ mode yields instant results. The Vantage feels more planted and aggressive, finding more front-end grip and rear-end traction, even around the patience-testing Bank turn. Put simply, you can drive it harder. It also feels more comfortable when provoked, even through the quick direction change at Beckham, where it’s easy to flick in and power through, transitioning from one easily controlled opposite lock slide to the other.

The faster corners of O’Rouge and Tower are real testers, but the Prodrive Vantage remains calm and collected, with a steadying nudge of understeer to remind you where the limit is. That might sound boring, but the car is carrying serious speed – certainly more than a standard Vantage could muster. As there’s also more precision and tighter control, you can massage the attitude on entry with the brakes or by backing gently off the throttle just as you turn-in. Not to provoke wild oversteer – the Vantage remains a tricky car to balance at high speed – but to gently neutralise the understeer.

The standard Vantage never feels completely comfortable on track, not in the manner of a 911 Carrera S, at any rate. Our findings at Bedford suggest Prodrive’s chassis and engine upgrades redress that balance, injecting the Vantage with just enough additional attitude and ability to make it feel more capable and rewarding, without shifting the bias from a road car that’s happy with the occasional track outing to a track-focused car that’s marginal everyday transport. It’s a fine balance, but one that’s been struck convincingly.

That much is made clear when we take to the road. In ‘normal’ the chassis is supple but well-contained, and freed from Bedford’s noise restrictions we can also enjoy the full, uncorked Prodrive experience. It really is quite a noise – savage and deep-chested with a terrific barrage of pops and bangs as the revs recede below 5000rpm on a closed throttle.

The 4.3-litre V8 engine still likes – and needs – to be revved to deliver its best, but where the standard engine never quite kicks with the conviction you expect, the remapped motor is sharper, stronger and genuinely thrilling to extend towards 8000rpm.

As the miles pass you get increasingly dialled-in to the subtleties of the work Prodrive has done. Through fast curves you more readily feel what the car is doing. What’s more, it reacts more cohesively, the front and rear working in harmony rather than occasionally in conflict. Where the standard car sometimes overreacts to particular bumps or compressions, the Prodrive soaks it up. With this extra damping composure you gain the confidence to push harder, at which point the grippier Pirelli tyres are a welcome addition.

It’s all thrown into sharp relief during a brain-out charge along an especially lumpen but seriously quick section of B-road. In all honesty, at the speed we’re travelling it’s the kind of road that would have tied the standard Vantage in knots, but in the Prodrive car I decide to keep my foot in – for scientific purposes, of course – and despite some serious pre-emptive grimacing, the worst that happens is a brief skrrsssch from one of the sacrificial underfloor rubber strips.

The best part of £19,000 is a lot to spend on a car that already costs £82,000, but if the response at the Autosport show is anything to go by there are plenty of people willing to pay over £100K for the ultimate entry-level Aston. Perhaps the bigger potential for sales lies with those who are about to buy a used V8 Vantage. By late 2007, early ones will be available for around £60,000, and as Prodrive wisely offers the engine, suspension, wheel/tyre and aero packages individually, customers can choose to upgrade their car over a period of months or years.

But whether you’re going the whole hog from new, or planning to let someone else suffer the sting of depreciation, there’s no doubt that Prodrive’s performance parts are worthwhile additions. 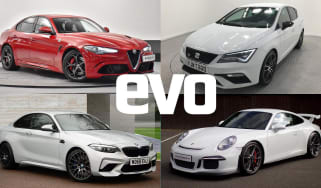