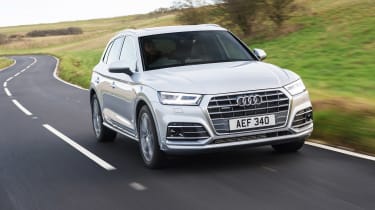 Audi’s all-new Q5 has hit the UK with an interesting post diesel-gate engine line-up, that is to say it only has one diesel option as yet. But with a vast majority of premium SUV buyers used to stopping at the black pump, does a petrol powered Q5 do enough to tempt buyers back towards unleaded?

Tested here in S-Line trim, this 2-litre TFSI Quattro model is the most dynamically focused non-SQ5 variant of the new car’s model range – but it will need to compete with the dynamic benchmarks of the Jaguar F-Pace, Porsche Macan and Alfa Romeo Stelvio to justify its heightened running costs.

Audi has put much effort into its latest sect of petrol engines, shared from within the Audi/VW group, the 2-litre turbocharged four-cylinder engine here offers up the latest set of innovations such as Audi’s valvelift system and direction injection.

Producing 248bhp between 5-6000rpm, it is the 272lb ft of torque available at 1600-4500rpm that keeps the Q5 feeling fairly brisk despite a lardy kerb weight. The engine is keen to rev, without that feeling of being stretched as the revs rise, but is most effective when kept in the mid-range while torque is at its peak. 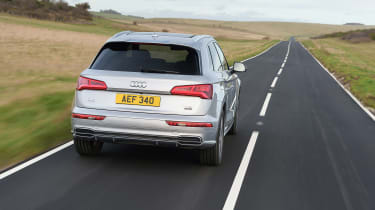 Connected exclusively to a mostly smooth 7-speed S-tronic dual-clutch gearbox, the Q5 incorporates the brands new quattro Ultra all-wheel drive system with the intention of reducing fuel consumption. In essence, quattro Ultra acts more like a haldex system, keeping the Q5 mostly front wheel drive and only shuffling power to the rear wheels when a certain degree of slip is detected. In reality, it is almost impossible to notice what’s happening beneath you, offering that usual quattro feeling of unimpeachable grip leading to a limit of scrubby understeer.

The new chassis may claim to have undergone a weight reduction over the previous model, but the Q5 still tips the scales at a chubby 1795kg, significantly more than the new Alfa Romeo Stelvio. Despite this, it is the fat torque curve and snappy dual-clutch gearbox that gives the Q5 a respectable 6.3-second time to 62mph and 147mph top speed.

Audi claim 40.4mph on the combines cycle (when fitted on 19-inch wheels) which is a little better than the Volvo XC90 T5 and a little worse than the Alfa Stelvio. In reality, the chance of bettering 40mpg is a little optimistic, but you should see mid-30’s in normal circumstances.

Beneath the Q5’s new body (seriously, it’s been redesigned - we promise) you can choose from four different chassis set-ups. The first is conventional fixed rate dampers and steel springs, which if you go for an S Line model will be stiffer along with the anti-roll bars. Adaptive dampers and steel springs is your next option followed by the same dampers but with £2000 worth of air suspension. 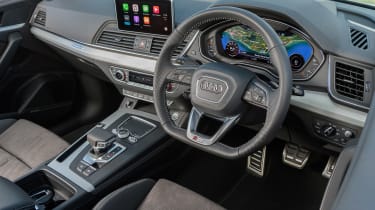 With an options list also home to matrix LED headlights (worth the £650), Audi’s Virtual cockpit (even at £250 some of us are still not convinced), a £1600 Technology Pack (8.3inch HD screen, touch-sensitive control panel, online map updates, 10GB Jukebox hard drive, Audi phone box to name a few items included) it takes a dangerously scant amount of time to build a £50,000+ Q5, and that’s when you start with an S Line model with a £40,170 basic tag.

Another beneficiary of Audi’s drive to shed the pounds, the new Q5 is more agile, quicker to respond and less flat-footed than its predecessor. You can push it along at a decent lick (think Golf GTI but with a mate or two on board) and with the air suspension fitted to our test car it remains calm and reassuring when the straights end and the apex hones into view. Get the nose turned-in and the body settled, and as you wind the turbo up the Q5 takes on an attitude not all that dissimilar to Porsche’s Macan as its rear takes the load and pushes you out of the corner. It’s all very un-SUV like, very un-Audi like and very welcome.

Stronger brakes wouldn’t go a miss to match the performance available, however, and a more natural feel early in the pedal travel would help moderate retardation better, too. 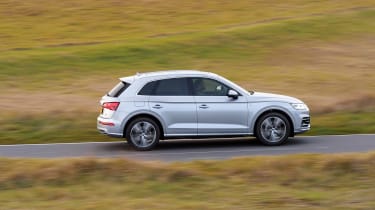 It’s not a driver’s dream by a long shot, but it makes the Mercedes GLC Class feel a little sensible, runs BMW’s X3 close for body control and responses and gets closer to Jaguar’s F-Pace and Porsche’s lower level Macan than either manufacturer would like it do.

Sitting in a very crowded segment, the Q5 is one of few to offer petrol-powered rivals. Both obvious German rivals, the BMW X3 and Mercedes-Benz GLC are diesel only at this price point, with petrol rivals both sitting higher in the range to combat the £50k SQ5.

Volvo’s next generation XC60 is available in T5 petrol form and rivals the Audi’s list price, power output and crucially desirability. Despite its sporty looks and wheel at each corner stance though, the XC60 is tuned more for comfort than driving prowess. Alfa Romeo’s Stelvio is a more abject rival however, besting the Q5 in the handling stakes and out performing it in a straight line thanks to a more potent engine and lighter kerb weight. 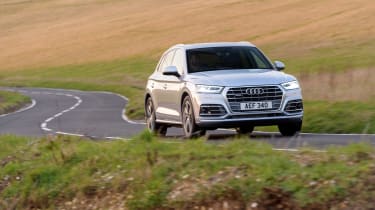 Porsche’s excellent Macan also would need to be considered, as despite being the very entry level model, the Porsche still impresses on the road and could well be worth the £6k jump in price over the Audi, even if equipment levels are a little bit mean. Jaguar’s F-pace 25t is also worth considering, despite being larger the big cats aluminium construction helps keep weight down helping it drive with more finesse than the Audi.

Outside of the SUV brigade though, it is hard not to recommend estate options like the BMW 330i Touring or Audi A4 2.0TFSI quattro, which are cheaper, better to drive, better looking and not an SUV at the end of the day.