Worthy of the original, but we’re not sold on the looks or the regrettable Dynamic Steering 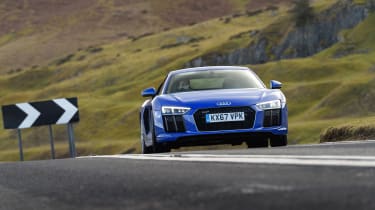 The difficult second album. Audi stunned us all back in 2007 when it launched the original R8. We wondered how a company with a patchy fast car history and no real sports car experience would pull off a mid-engined Porsche 911 rival, but somehow it did. The original R8 got better and better with age, culminating in the sublime V10+.

This is the new version. The overall shape is immediately familiar, but the front and rear ends now show off an aggressive, angular form that works more effectively in person than it does on the page. That said, for my tastes the original’s pretty simplicity has been lost.

There is no V8 option. This V10+ sits at the top of a two-model line-up, propped up by the V10. Power starts at 533bhp and rises to 602bhp – genuine supercar territory. Both versions deliver peak power at 8250rpm, which is pretty wild for such a big ten-cylinder unit, but they’ll actually spin on to 8700rpm before the limiter chimes in to stop the pistons thumping themselves through the glass engine cover.

Peak torque in the V10 is 398lb ft, rising to 413lb ft in the V10+ (both develop peak torque at 6500rpm). Drive goes to all four wheels via a seven-speed twin-clutch gearbox, which has been tweaked to deliver quicker gearshifts.

The clever four-wheel drive system can divert 100 per cent of torque to either axle, while a limited-slip differential further apportions drive between the rear wheels. 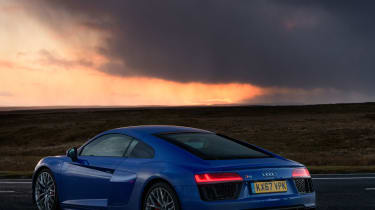 The basic structure is now an aluminium/carbonfibre hybrid. The rear bulkhead and transmission tunnel are carbonfibre – the engineers only used it where strength was needed in just one direction – which has helped reduce weight by 15 per cent and increase rigidity by 40 per cent compared to the original R8’s shell. Audi claims the overall weight saving over the previous model is ‘up to 50kg’, which we won’t take too seriously. At least it isn’t heavier.

The engine, shared with the rampant Lamborghini Huracan, can now shut off five of its cylinders when cruising to save fuel. There’s also a coasting function incorporated into the transmission for the same reason.

Magnetic variable dampers are optional, as is Dynamic Steering. The latter uses a variable ratio rack to offer light, quick steering at low speeds and improved stability at higher speeds. As we’ll find out, that’s no good thing.

In addition to the familiar Comfort, Auto, Dynamic and Individual driving modes, there is now a new switchable performance mode – standard on the V10+, an extra on the V10. It cycles through Dry, Wet and Snow settings to adjust the level of stability control intervention depending on the road conditions. 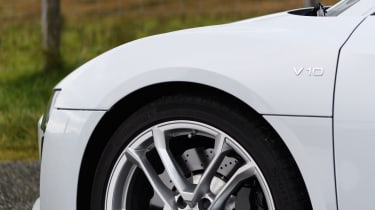 With everything turned right down, the R8 V10+ is a docile, supple and relatively quiet machine. As long as you don’t need rear seats there’s no reason the R8 couldn’t be a daily driver. Turn it all up, though, and it really does transform into a bona fide supercar.

The drivetrain is stunning – the engine is ferociously responsive and it revs with real intensity in the upper reaches, while the gearbox is instantaneous. It ranks among the very best for immediacy and is one of the major areas of improvement over the old car. It’s a pity more of the serrated, hard-edged exhaust bark doesn’t find its way into the cabin, but here is an engine with the character and excitement we expect of a supercar.

The Dynamic Steering feels pretty good a notch or two back from the limit and it’s unwaveringly precise. The weighting is pretty natural, too, so the front axle responds with a predictable immediacy. It all feels nicely cohesive.

Then you push a little harder, ask too much of the front tyres and the nose begins to wash wide….with no indication from the helm that the tyres were about to let go. It’s frustrating that the variable system robs the car of that layer of interaction because it otherwise feels so positive on its way into an apex.

There’s bundles of body control and good pliancy – although the firmer damper mode is likely to be too much for the UK’s most broken up back roads – and the body rolls just enough in corners to let you know how hard the chassis is working.

The four-wheel drive system works so effectively that not a single horsepower is squandered. That gives the impression of the R8 being completely locked down and defiantly non-adjustable. Push a little harder and you’ll uncover a window of low and medium speed understeer – quite a large one, it must be said – and once again you have to push on even further to discover the R8’s playful side.

On the track it’ll actually cut some fairly serious shapes, but you really do need a decent amount of space and a minimal amount of imagination to get it to unstick itself and come alive on the road. To be clear, I wasn’t expecting armfuls of corrective lock and clouds of tyre smoke from the new R8. But in the old model, you could play with the chassis balance and feel it squirming around a little at perfectly reasonable speeds. It was one of the things that made it so much fun. 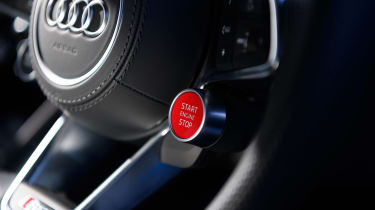 So to smash your way through the understeer window and get it moving around you have to back the car in on the brakes, then apply the power very quickly. It will then start to find its way down the road in a fun, engaging way, but the old car would do so without demanding so much of the driver. Sometimes, progress doesn’t always feel like progress.

There’s no doubt the R8 is seriously quick and properly sorted, but the optional Dynamic Steering costs it some of the crispness of the old car and that more efficient four-wheel drive system has made the car less expressive.

The standard of the competition in this sector is seriously impressive. The Porsche 911 Turbo S is the consummate everyday supercar, but it lacks the R8’s character and it only comes alive on the road when you disconnect your brain from the rest of your nervous system.

Mercedes’ AMG GT S matches the R8 for kerbside appeal and it offers a classy, involving driving experience. It’s our current leader in this category, which may yet change when it meets the R8. 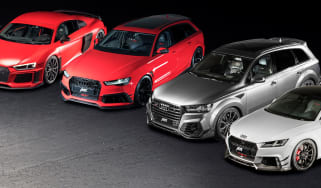 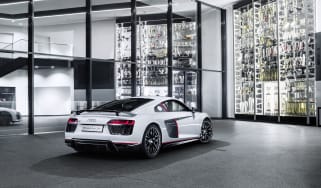 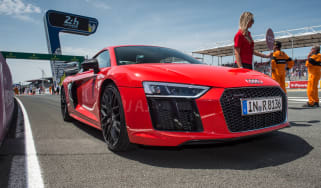 Baptism of fire - my first time at La Sarthe, a new R8, 180mph and no clue where the track goes 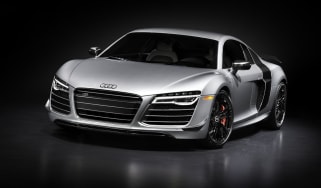 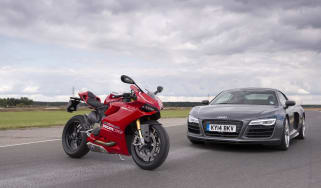