Audi partners with Abt Sportsline for a 695bhp RS6 Nogaro Edition 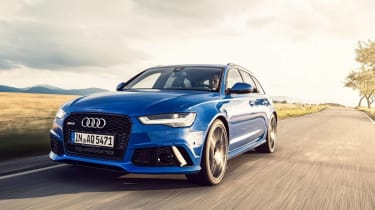 Audi has called on Abt Sportsline to produce a range-topping RS6 Avant, capable of producing 695bhp. Priced at €138,800 (£122k), the Audi RS6 Avant Performance Nogaro Edition is limited to 150 units with no UK allocation.

This hottest of RS6s is finished in bright Nogaro blue as an homage to Audi’s original fast estate, the RS2. Most changes over the standard car are superficial, but the crucial modification, brought by Abt Sportsline, is a reprogrammed ECU which liberates another 98bhp from the twin-turbo 4-litre V8 engine, taking power past a Porsche Panamera Turbo S E-Hybrid to 695bhp. Torque is up too, by 96lb ft from 553lb ft to 649lb ft. The extra performance has lifted top speed to 199mph.

Carbon ceramic brakes have been fitted to rein in the extra power, normally an option on the RS6, and the standard air-suspension has been left alone. The paint finish aside, the exterior mirrors the standard RS6 Performance, and titanium exhaust tips, 21-inch wheels and tinted windows all feature. The interior is also inspired by the RS2 with carbonfibre inlays and swathes of blue and grey alcantara – the headlining is trimmed in the latter, as is the steering wheel.

Head of Audi Sales Germany, Martin Sander said, ‘The Audi RS 6 Avant Performance is generally a car for lovers of powerful avants. We deliberately limited the new edition to 150 cars in order to keep them particularly exclusive, The color Nogaro blue pays homage to one of our big icons – the 1994 Audi RS2, the first RS model ever. ‘