Some things in life are certain. Toast will always drop butter-side down; there will always be a traffic jam when you're late; you will never have the right change for the pay and display; and you only ever need something once you've lost it. True to form, our long-term Audi had no sooner left the car park at Evo Towers than the weather changed and the snow fell. Talk about rubbing salt into the wound. 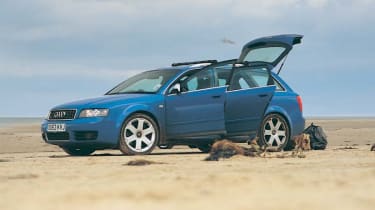 Some things in life are certain. Toast will always drop butter-side down; there will always be a traffic jam when you're late; you will never have the right change for the pay and display; and you only ever need something once you've lost it. True to form, our long-term Audi had no sooner left the car park at Evo Towers than the weather changed and the snow fell. Talk about rubbing salt into the wound.

I could really have used the quattro drive system. With 25 years of development behind it, it would, without doubt, have saved me the embarrassment of being snowbound in the Arctic tundra known as Suffolk. Last year in Wales the S4 came in very handy for pulling a 4x4 pick-up out of a boggy ditch. It's surprising just how much traction it produces, but then it is packing a 344bhp punch.

For the source of all that power, the people at Audi elected to install the gurgly 4.2-litre V8 found in the bigger RS6, but minus the turbos. While light for its type, the V8 is a pretty hefty lump to chuck in the nose of a car of the A4's size, and one of the consequences was tyre wear - and lots of it - at the front. Commendably, though, this didn't translate into ponderous steering, and though the S4 never felt quite keen enough to make you seek out the long, twisty way home, it was always an accomplished ground-coverer.

The S4 was as easy to drive as a small hatch on urban roads but its real forté was long distance travel. At a 'touch' above the speed limit, the engine was barely ticking over, and the cabin boasted amazingly comfortable Recaro seats (heated, of course), a great-sounding Bose sound system (loud enough to shame Novaboy), and a level of sound insulation that isolated you wonderfully from the drone of the tyres and the whistling of the wind.

The drawback of the sound-deadening is that you miss out on the V8's enthralling soundtrack. Still, there was always amusement watching bystanders looking around for the cause of the burble as you ebbed past; surely such a delicious noise couldn't emanate from an inauspicious-looking estate car. That was one of the great attractions of the S4, its ability to play the role of Q-car. The average bloke in the street scarcely gave it a second glance. Yet take it somewhere like Le Mans, or other enthusiast venues, and the S4 is afforded the same level of respect as more 'obvious' sports cars.

Having driven the manual version of the S4 before our long-termer arrived, I think I'd have preferred to live with three pedals instead of just the two. The paddle-shift auto is very effective, don't get me wrong, but as Velcro is to shoelaces, it's the lack of human input that kills it for me. Belting down your favourite B-road, believing that changing gear the same way an F1 driver does will make you a better driver, is deluded. Besides, most people found the throttle response in 'Sport' mode too aggressive. Most ended up leaving it in normal Drive and enjoying all that power.

A heavy four-wheel-drive car with a big V8 is always going to like a drink, and the S4 certainly fell into that category. Only once did I see the fuel consumption better 23mpg, so the S4 put as much wear on my fuel card as it did its rubber.

The first set of tyres, ContiSports, were replaced after 14,000 miles, which as most of the miles were on the motorway didn't seem so good. The replacement Uniroyal Rainsport 1s weren't as eager to play as the Contis and proved even worse for wear, lasting just 8000 miles. Goodyear Eagle F1s were next on and totally transformed the car. The Eagles were the best tyres we fitted to the S4 - they made it feel much more planted and they also wore much better than the others.

Audi ownership wasn't all wallet-punishing, though. Vindis Audi, Cambridge, carried out the first service, at 18,000 miles, for just under £300; that seemed reasonable having seen several Fast Fleeters running up similar service bills after only a third of the miles.

And then there were all the workhorse duties, all the moving of furniture, transporting friends and family on holiday, and all with Swiss-train reliability. Life won't be the same now it's gone.