Attention turns to the 1M’s damaged alloys this month, as well a new set of tyres 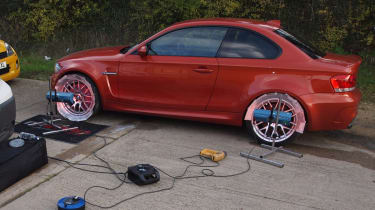 No matter how hard you scream, no matter how extreme your swearing, neither will repair paint damage on your bumper. I know, I tried it when I discovered the three-inch-long gouge to the front of my Clio V6. To this day, I don’t know what caused it.

A call from a company called Revive! shortly after I reported the damage in issue 162 (hmm, perhaps they did it?), offered a solution – although the idea of handing the repair to a mobile bodyshop filled me with dread. I’m just a bit particular when it comes to who touches my car.

Revive! offers a pretty much nationwide cosmetic repair service for scuffs, scratches and even alloy wheels. The latter was of particular interest, as our BMW 1M needed a pair of alloys repairing. With time tight, I booked both cars in for the same day. Terry from Revive! arrived at 9am, and promised to have the Clio’s bumper and the two alloys repaired before 3pm. I didn’t believe him.

The first stage of the repair to the Clio involved a grimace from Terry as he looked at the paint code. Liquid Yellow consists of a strong yellow base coat and a pearl top coat, giving the slight iridescent effect. It’s one of the trickiest colours to match, especially in a small area that would need blending into the existing paintwork. Terry set about mixing the paint from instructions delivered via a mysterious piece of software on a laptop in the back of his van. Indeed, the van looked more like a laboratory than a mobile bodyshop. With ingredients weighed on electronic scales and mixed into a bottle, he was confident of the match.

Preparation involved sanding the area and repairing any small cracks. Then, with the area clean and the car masked, the paint was applied via a compressor in the back of the van. Infrared heaters dried the area while Terry went to work on the 1M.

‘The rear wheel has been repaired already,’ he declared as he inspected the rims. As a press vehicle, our 1M had a pretty tough life even before evo got hold of it. Fortunately, only cosmetic repairs had been carried out.

The process of wheel repair sounds simple, but the attention to detail is huge. Every stage is carefully considered, every nick, chip and scrape carefully repaired (either with thin alloy fillers or layers of paint) and every stroke from the spray gun expertly applied.

With the new silver paint on the BMW’s wheels and the infrared heaters switched over from the Clio, Terry added the final ‘liquid’ effect coat to the V6. Then switching back to the BMW, he applied the final clear coat to the alloys. All very impressive. At 2:59pm, he announced that he was finished. Inspecting both cars very closely, I couldn’t find any evidence of repair – and believe  me, I looked.

The Clio’s barely been driven since I buggered up my back – I find the wide sill and tall bolsters painful to vault as my spine recovers from losing a disc – but the 1M continues to pile on the miles, and with every one I fall harder for its charms.

Increasingly greasy roads ask big questions of the 1M’s stability system, and the throttle pedal can seem like it’s working in reverse: the harder you push, the less power you get. Selecting MDM relaxes the reins and also loosens the DSC threshold, allowing a smoother, less interrupted power delivery, so I tend to press it before every journey, along with the M button (to sharpen throttle response). Ideally this would be my default setting and the only option available would be to tighten the DSC and dull the throttle response… for when other people are driving ‘my’ beloved 1M!