A pleasant enough and pretty convertible, but the chassis lacks any real dynamic sparkle 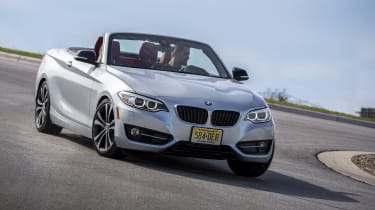 This is the drop-top version of BMW’s very likable 2 Series. It’s an important new model for its maker – the 1 Series Convertible that went before it was the biggest seller in its class, shifting some 130,000 across the globe. It sold well in the UK, too – in fact, Britain was the third largest market for that model.

For its replacement, BMW has targeted improved day-to-day practicality. To that end the boot is bigger, the fabric roof cuts wind noise by half compared to the 1 Series Convertible and it can be operated in 20 seconds at speeds up to 31mph. 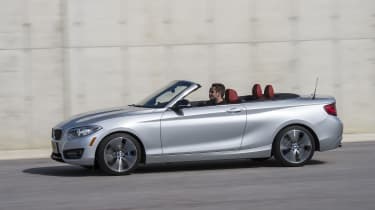 There’ll be a range of engines available – the big sellers will be the four cylinder diesel units. The range-topper will be the 322bhp M235i. The 3-litre, normally-aspirated six-cylinder engine that powered the 130i has been dropped in favour of a turbocharged four-cylinder, as tested here.

By slicing off two cylinders and adding a turbo, BMW claims to have increased power output by 12 per cent while burning 20 per cent less fuel. It uses a twin-scroll turbocharger – BMW refers to TwinPower Turbo technology, but it really is just the one blower – to return 242bhp at 5000rpm and 258lb ft of torque between 1250 and 4800rpm. That’s a remarkable torque curve for a 2-litre four-pot.

Equipped with the excellent ZF eight-speed automatic transmission, the 228i will crack 62mph in six seconds. The manual version is a tenth slower, but both top out at the same 155mph. BMW claims 42mpg on the combined cycle.

Still rear-wheel drive the 228i splits its mass evenly over its two axles, while torsional rigidity is up 20 per cent compared to the model it succeeds.

A consequence of all the additional structural bracing that has been thrown in – an effort to claw back some of the rigidity that was lost when the roof was lopped off – is that the Convertible weighs close to 200kg more than the Coupe. 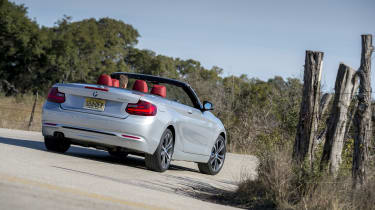 Inoffensive and pleasant rather than truly exhilarating. There’s enough pliancy in the ride quality to suit the car’s cruiser role and with the hood in place wind noise is very well insulated; when down, the cabin is reasonably calm at motorway speeds as long as the wind deflector is in place.

The structure does feel pretty stiff when cornering, but over uneven surfaces there is a degree of movement in the steering rack. You’d have to really throw the car over some particularly nasty potholes to make the windscreen surround shake and rattle, though.

The steering is precise, but it’s lifeless. The car feels neatly balanced when tipped into a bend, but it doesn’t take a great deal of effort to find the limits of its body control and agility. Through sheer turn-in and mid-corner grip – the 228i uses a similar Michelin Pilot Super Sport to the M3 – it does carry impressive speed, but there simply isn’t a great deal of fun to be had from hustling it hard. It’s much more adept at the relaxed, cruiser role for which it will mostly be used.

Under full load the car feels quick in a straight line, but there is the impression of the engine working against a significant mass. In terms of the way it responds and revs out to the redline the four-cylinder unit doesn’t feel turbocharged – some of the old six-cylinder’s creamy smoothness has been lost, though.

As ever, the ZF automatic gearbox works brilliantly both in manual and auto mode. It mightn’t have the sheer shift speed of a twin-clutch unit, but in a car such as this one that simply doesn’t matter. 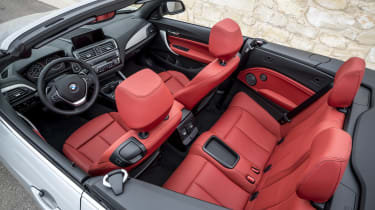 Whereas the 1 Series Convertible had a face that was difficult to love, the 2 Series is altogether prettier. It looks its best when decked out in the M Sport styling kit, and on 18-inch wheels.

There isn’t a great deal to celebrate about the cabin, except to say that the quality is on par for the class, iDrive is still the best infotainment interface out there and the driving position is pretty much spot on; the dashboard architecture, meanwhile, is conservative rather than particularly inspired. 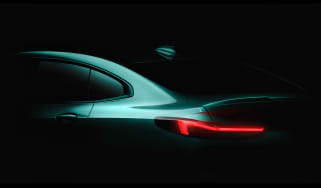