Handling package creates a sharper M3, but is it enough to stop us hankering for a CSL? 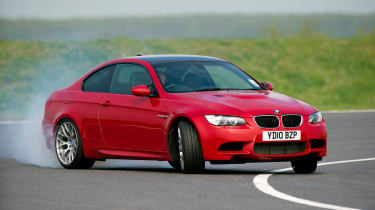 Boy does the M3 Competition slide well. Seeing as I’m less than a metre adrift of the pointy end of Adam Duckworth’s Nikon and the chunky back bumper of the Peugeot RCZ in which he’s nestled, I’m glad of this. I can put the M3 exactly where I want it, choose my angle, line, trajectory and distance with incredible accuracy. I’m not trying to make myself sound heroic, but as we complete the umpteenth pass I’m so at home that my mind starts to wander. And nope, I can’t think of a single car that drifts better than this one, that flatters the oversteer enthusiast to a greater degree.

But is this talent unique to the M3 Competition? Don’t all M3s slide with equal ability and affinity? No it isn’t and yes they do. So that being the case, what is it that separates the Competition from the standard car and justifies the £3315 BMW charges for this pack?

It must be said that it’s got some gorgeous wheels – curiously like those that were fitted to the last-generation M3 CSL, don’t you think? Of course, it’s no coincidence. The CSL is the Competition’s inspiration, its reason for being, and the 19-inch wheels are a clear visual link between the two.

But here’s where we run into trouble. The CSL was a failure. We may look wistfully back across the seven-year gap and marvel at M Division’s ability to reduce the E46 M3’s weight by 110kg, to extract 355bhp and 109bhp per litre from its 3246cc straight six, to fit Cup tyres and a carbon airbox, but no matter how thick the rose tints, the commercial reality is that the 422 CSLs delivered to the UK took a long time to find homes. M Division did something wonderful, something raw, something pure, and by way of thanks got its fingers burned.

It’s hardly surprising, then, that the Competition takes a different tack. This package of upgrades is a box-tick option, something you specify for your M3 at the same time as choosing whether you want folding door mirrors and parking sensors. There is no power gain (the 4-litre V8 still puts out 414bhp), no weight reduction (the car still tips the scales at 1655kg – some 270kg heavier than that CSL, which actually pips it on power-to-weight). You get the wheels, obviously, plus a 10mm suspension drop and Electronic Damper Control (EDC, usually a £1295 option). But here’s the thing: in the 7500-word press release that accompanied the launch of this car, only one solitary sentence matters. ‘Compared to the standard EDC system, the one fitted as part of the Competition Package has a revised “Sport” setting to enhance the handling characteristics with an even greater bias to enthusiastic driving.’

Allow me to translate. With the suspension in its stiffest mode, it’s now even stiffer than it was before. Oh, and the traction control’s been backed off a bit, too. A halfway house to the highly anticipated GT3 RS‑rivalling M3 GTS or a bit of electronic fettling? More the latter, I reckon.

Then again, does it really matter? At the Bedford Autodrome the Competition is fabulous, not only because it does big skids but because it feels so tense and tight. If you could pluck it, it would sound like a violin string. Vast reserves of mechanical grip through fast corners, beautifully weighty steering, iron-fisted body control; it’s lean and focused, yet staggeringly approachable at the limit.

And there’s no slack in the rear axle at all. The moment you feed some power back into the chassis you sense the M differential knuckle down, transitioning the torque, altering the car’s attitude before hurling you on to the next straight. ‘M3 Competition,’ you think. ‘Yeah, pretty apt name as it happens.’

So is this precision new? In part, yes it is. It’s hard to be certain on a smooth track – in fact it’s difficult to detect on pretty much any piece of tarmac – but the M3 Competition does seem to have a touch more attitude than the standard coupe.

I can describe the differences in two ways. Firstly, you notice the weight more now. On bumpy roads the Competition has to fight to keep control of itself. It does a brilliant job, but every so often you catch yourself thinking, ‘Imagine how good this would be if it weighed a quarter of a ton less.’ The suspension has that slight short-travel edginess that characterises lighter sports cars, but here it’s saddled with a relatively tall and practical four-seat body. It’s not that the ride is notably worse. OK, so it’s pretty savage, but then it always has been.

Secondly, the Competition feels like a response to the Nissan GT-R. Alter the settings for the dampers, throttle, steering and gearbox to maximum attack and it has a GT-R vibe, coming across as a little less compromised than before, conveying a take-no-prisoners attitude. Has BMW managed to achieve this by modifying nothing more than the dampers? Apparently so. You’ve got to admit that’s a neat trick.

I think it helps that our test car is fitted with the double-clutch gearbox. I’ve tried the Competition with a manual too, and although that’s the one I’d have for purely old-fashioned reasons, I think the £2590 DCT is better matched to the drivetrain. Sluggish around town and occasionally awkward if left to its own devices when you’re ambling, it’s by no means faultless. And why does a double-clutch ’box, the entire point of which is instant changes, need five different speed modes? But when it’s picking off seamless upshifts, leaving you with uninterrupted access to the mighty V8, or when it’s firing through rev-blip downshifts, it comes close to delivering the interactivity we crave from these transmissions. Of course, it helps that the engine is truly magnificent (the fact it’s now got start/stop technology is a bonus, too).

Minuses include that stiff ride and the constant road rumble, and there’s really no need for the steering wheel rim to be as fat as a Bratwurst. Tyres are the other small bone of contention. We mentioned this when we drove the M3 Edition last summer (evo 136), because that car came fitted with the other OE tyre, Continental’s ContiSportContact 3, and we loved the way its lower grip limits made the M3 more adjustable through corners, allowing its natural balance to shine more brightly. This car, however, is on the more common Michelin Pilot Sports, and although grip is undeniably awesome, they do rob the M3 of a little flow.

The payback is precision – it’s the word that most accurately defines this car. You can put the M3 Competition exactly where you want it. There’s no delay, no fuss. You input, it responds. So, yes, we wish BMW had taken the Competition concept further. It’s hard not to view this as a missed opportunity to establish total class dominance ahead of the arrival of the Audi RS5. But that’s not to say it isn’t a good car, because it is. In fact the M3 Competition is a brilliant one.