We catch our first glimpse of the new BMW 3-series Touring in testing, having already seen the saloon. 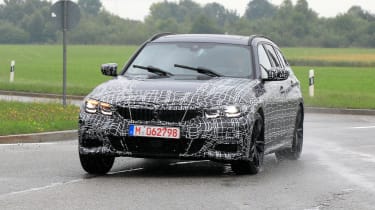 Our spy photographers have captured images of a disguised BMW 3-series Touring undergoing testing, ahead of its 2019 launch. The car is showing subtle cosmetic changes over the outgoing model along the lines of what we’ve already seen on the 4-door saloon version, that has already been spotted and is expected to debut at the 2018 Paris motor show. When the Touring estate model goes on sale it will go up against the Audi A4 Avant, Volvo V60 and Mercedes-Benz C-Class Estate.

Despite the patterned-wrap we can glean plenty of details from the images. Quite clearly the aesthetic represents an evolution over the previous 3-Series Touring with a number of obvious revisions but similar overall themes.

Up front, the layout is carried over from the preceding model: the headlights and signature kidney grilles share a similar relationship, and there’s the same open, bumper design with its three cut-outs.

Another familiar design cue is the swage line running down the flank, through the door handles to the rear lights, although it's not as prominent here. However, the new car does cut a sleeker silhouette with the windscreen and roofline more steeply raked.

The blue brake calipers and dual-exhausts, all but confirm this test mule is an M-Division fettled model, likely the range-topping M340i. Also of note at the rear are the light clusters, which look like they've been taken from the latest BMW 5-series. 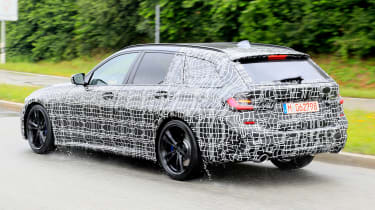 The petrol engines will include a 1.5-litre triple and 2-litre with varying power outputs, and a 3-litre six-cylinder motor is expected, too. As for diesels, multiple derivatives of the current 2-litre unit should reappear, alebit revised. BMW’s xDrive, all-wheel-drive system will also be available, although it's unlikely to applicable across the whole range of engines.