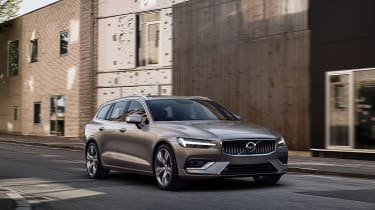 Volvo’s proliferation of new models are still streaming out of its Gothenburg HQ in an overhaul that has replaced nearly all of the marque’s line-up in under four years. The latest is the new Volvo V60, a compact executive estate aimed directly at the BMW 3-series Touring, Audi A4 Avant and Mercedes C-class estate.

Underpinned by a multi-billion dollar investment from Chinese automotive giant Geely, most of Volvo’s rapidly expanding range have been developed on a modular platform called SPA. This V60 is the smallest model so far to be based on this platform, sharing most of its powertrain and chassis components with other Volvo models.

As a result, the V60 will initially be available with a selection of 2-litre engines seen in other Volvos, starting with two turbocharged petrol versions named T4 and T5, a 335bhp T6 Twin-Engine hybrid and flagship turbo/supercharged 384bhp T8 Twin-Engine seen elsewhere in the Volvo range. For those who still have a disposition towards diesel, Volvo will also offer company car tax-friendly D3 and D4 options. Connected to all models will be an 8-speed automatic gearbox and either front or all-wheel drive depending on the engine. With the separation of Polestar from Volvo, a replacement for the 362bhp V60 Polestar is no guarantee.

The V60 doesn’t stray far from the distinct, sophisticated design language applied across the range, either, closely mirroring the sleek aesthetic seen on the larger V90. The V60 does differ in places, though, with more emphasis on the rear haunches and a shorter, less tapered tail.

The V60’s interior takes its cues from existing Volvos, meaning a clean, minimalist design with excellent material choices, and just enough embellishment to make it feel suitably premium. Space should also be on a par with rivals, although we suspect that, like the larger V90, it will sacrifice a bit of boot space for the sake of its rakish rump.

> Click here for our review of the Volvo XC60

Safety features of both the passive and active variety will feature, too, including Volvo’s semi-autonomous Pilot Assist. Volvo’s unambiguous bias towards comfort for the V60 may not sound very evo, but it does at least have a clear idea of the sort of car it is. Volvo has not made any mention of an S60 saloon variant, nor indeed a jacked-up Cross Country version either.

With the V60 due to make its public debut at the Geneva motor show in a few weeks, Volvo’s sales figures are sure to continue to grow thanks to yet another classless, practical and stylish core model.