Not cheap when it went on sale in 1987, but the M3's universal praise from the motoring press ensured its success 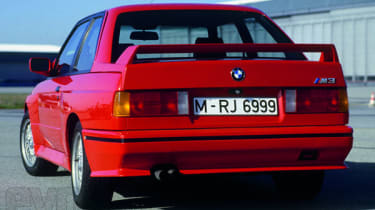 Today we take BMW’s ‘M’ cars almost for granted, but back in the mid-’80s the company’s motorsport division had put its initial on just three road-going models: the M1 supercar, the similarly engined M635CSi and the mildly tweaked M535i. Yet while each of these cars intrigued and impressed, none of them would be talked about as much as the next road car to emerge from the M Division, the E30 M3.

Although designed primarily to take on BMW’s rivals on the race track, amongst them Mercedes-Benz’s rally car turned DTM racer, the Cosworth-powered 190E 2.3-16, the public would get to experience the M3 too, as the Group A rules of the time specified that 5000 road-legal examples of the car would have to be built in its first 12 months for it to be homologated for competition use.

The core of the M3 would be its engine, but rather than choosing a more powerful six-cylinder unit as a starting point, Paul Rosche, then technical director of BMW M GmbH, opted for a high-output four-cylinder, not only to save weight, but also because it would be able to rev higher (the six-cylinder engine’s crank suffered from vibrations sooner).

The new engine was based on the iron block from BMW’s production 2-litre four (which could trace its roots back to the BMW 1500 of the 1960s) but with a long-stroke crankshaft and an increased bore giving a larger capacity of 2302cc. Mated to this was a shortened version of the four-valves-per-cylinder head from the M1 and M635CSi, equipped with Bosch Motronic fuel injection. In final production form this would give 200bhp at 6750rpm (195bhp with the optional catalytic converter), with a rev limit of 7300rpm. In competition trim 300bhp and even higher revs would be attainable. Amazingly, the first prototype engine would take just 14 days to get up and running, hence the unit’s ‘S14’ designation.

The M3 would also get a Getrag five-speed gearbox complete with close ratios and a dog-leg first, while a limited-slip differential would help to get the power down. Handling was improved with uprated springs, new Boge dampers (an electronically adjustable set-up would later be an option), thicker anti-roll bars and an increased caster angle on the front suspension to improve stability and steering response. Behind new five-stud 15in BBS alloys were the stronger stub axles and wheel bearings from the 528i, plus upgraded brakes (280mm vented discs at the front, 282mm solid ones at the rear) with a Bosch ABS system.

While the M3 shared its basic shape with the stock E30, all the panels bar the bonnet and doors were different. The wings were flared to accommodate the larger wheels required for motorsport, the angle of the rear screen was reduced and a higher bootlid adopted to improve airflow to the new rear spoiler, while the front and rear bumpers were changed to match the new wings and provide further aerodynamic assistance. The result was a drag coefficient reduced from 0.38 to 0.3.

A prototype M3 was shown at the Frankfurt motor show in September 1985 and production started a year later, not at the M Division’s Garching factory but, because of the large number of cars that needed to be built in a short space of time, at BMW’s Munich-Milbertshofen plant.

The M3 went on sale in early 1987 priced at £22,750 – some £6000 more than a 325i Sport and just £2500 shy of a Porsche 944S. Not cheap, but then it would receive universal praise from the motoring press, while over the following years the racing version would win the German, British, Italian, European and World Touring Car championships, many of them more than once.

By the time production ended in 1991, nearly 18,000 M3s had been built (including three small runs of different ‘Evolution’ versions, each created to homologate further modifications). This success would pave the way for many more M-cars, all of them more powerful, most of them excellent drivers’ cars too, but, as we discovered in 2007 when we brought together 13 different M models for our ‘Ultimate M Test’ story, none of them could quite match the magic of the E30.