While the core M3 concept has remained unchanged, BMW's engineers have revealed several different visions over the years 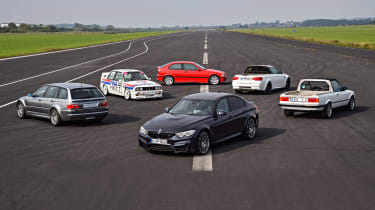 Over the past three decades the M3 has gone through five generations, each bringing with it significant advancements in performance and technology but, in theory at least, maintaining the distinct motorsport ethos that made the very first M3, built upon the E30 chassis, a car that today is as revered by drivers as it is by collectors.

And the E30 M3 remains the only true homologation car of the five generations, created to take victory in Group A touring car racing, notably the Deutche Tourenwagen Meisterschaft or DTM - an arena in which BMW competes (and wins) to this day.

It’s distinctive not only for its on-track success but its differences to the regular E30 3-series of the era, sharing very few panels with the standard car. The box wheelarches are most obvious, but new front and rear bumpers, a distinctive new bootlid and even a redesigned C-pillar all differentiated the M3 visually.

It was different under the bonnet too, using a 2.3-litre (and later a 2.5-litre) inline-four, fed by a 16-valve head, fueled via individual throttle bodies and beefed up with a stronger crankshaft suitable for up to 10,000rpm.

From the E30 M3 the story moved on through the six-cylinder E36 and E46 generations to the E90 V8s and back to the latest turbocharged sixes - which also heralded the first M4 badge, but to celebrate the M3’s 30th anniversary BMW has delved further into the model’s history to highlight some of the more unusual cars to have worn the M3 badge. 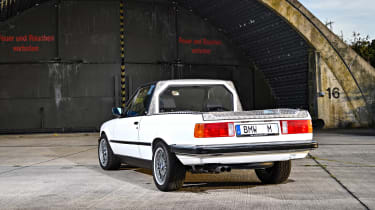 As far back as the E30 M3, that included a pickup variant, built by the Motorsport department to ferry parts around the factory. Based on the M3 convertible - with its additional bracing - it actually used the body panels from a standard 3-series, while the engine switched from the tax-dodging Italian 2-litre unit to the proper 2.3-litre four.

The next significant M3 concept came with the E36 generation Three, but rather than using the coupe, saloon and convertible body styles of the production model, the inline-six saw service in the Compact body. 150kg lighter than the equivalent coupe, it would have made for a seriously potent (and perhaps difficult to handle) hot hatch.

With the E46 M3 a different body style was tried: a Touring estate. Had it made production it’d no doubt rank highly on a list of the most desirable BMWs - the handsome E46 Touring body featured the coupe’s wide arches (despite the need for rear doors) and proved it was indeed possible to transplant the M3’s mechanicals into a more practical shell with minimal work.

And then came another pickup. You may remember this one, as it served as the brand’s April Fool’s joke in 2011 - but like the very first M3 pickup, it was actually designed as a workhorse at the Motorsport factory.

All are fascinating projects but all merely diversions from the core M3 concept, packing high performance into an otherwise practical and stylish form. While this concept has changed over the years and may have failed to hit the spot in standard form in more recent iterations, it is a concept that has remained unfailingly popular over the last 30 years.