There are more comfortable ways to travel than with the M3, but few are more exciting 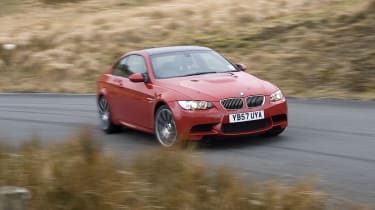 Sometimes I seriously doubt that the M3 is the best in its class. Shocking, I know. Heresy almost. The slight headache I’m hoping paracetamol will cure in about ten minutes’ time is quite possibly due to the M3 owners’ forum sticking pins into a gangly Catchpole voodoo doll. But the Lexus IS-F is more relaxing to just jump into and drive and is also a lot easier to reach the limits of. So too the C63 AMG. And as art editor Paul Lang commented when he handed the M3’s keys back to me after borrowing it the other day, in normal driving the BMW can actually be mildly obstreperous if you’re not used to it.

He’d discovered that, particularly when it’s cold, if you mistime building-up the revs as you engage the clutch then the transmission will happily try to bodypop the car away from the lights or into a roundabout. (He also suggested that the M3’s bonnet bulge makes it look like it’s trying to conceal an erection, which probably tells you all you need to know about the workings of Paul’s mind.)

So, on an everyday basis, I think you’d probably get more enjoyment out of the Merc or Lexus. But then I have a drive like the one last week and I remember why the M3 is still the best. We were in Wales for this month’s KTM group test and YB57 UYA was there as a support car. At the end of a day in which I’d driven a Caterham R500 for five hours from Surrey to Wales, the M3’s Goth-spec interior – Novillo Black leather topped off with Titanium Shadow (light black) trim – was hushed. But on the drive to our overnight resting place the car was fantastic. On a lowland road, tightly walled on either side, following the meandering path of a small river, the following KTM was nowhere to be seen in my mirrors after just a mile as the BMW got up on its Michelin-shod toes, dancing around the corners as only it can.

At 7000rpm the V8 howls and the throttle is sharper and cleaner than a paper cut. And it is a fast car. Very, very fast. Compared with its competitors it might be a case of delayed gratification, but cometh the hour…