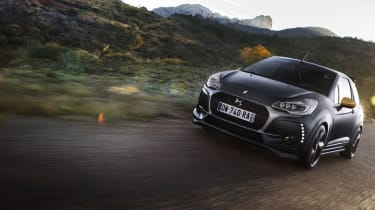 As DS forges ahead as a distinct brand from Citroen, this is the hot hatch version of the DS 3. The DS brand has very much been built on style, so there seems to be more emphasis on special colour options and horological accessories (see below) than any tie-up with its WRC team. However, the mechanical ingredients are all there so this could be a cracker.

There is an endearing and welcome simplicity to the DS 3 Performance’s mechanical set up. A six-speed manual gearbox is a good start and a Torsen limited-slip diff is a pleasing step on from the old Citroen DS 3 Racing. Under the bonnet is the THP S&S 1.6-litre four-cylinder turbocharged petrol engine that we have seen more recently in various states of tune in hot Peugeots. Here it puts out 205bhp and 221lb ft of torque.

The suspension has been lowered by 15mm compared to the standard DS 3s, while the front and rear tracks have been widened by 26mm and 14mm respectively. The wheels are 18inches in diameter while the brakes are supplied by Brembo and measure 323mm at the front. It is also available as a convertible. 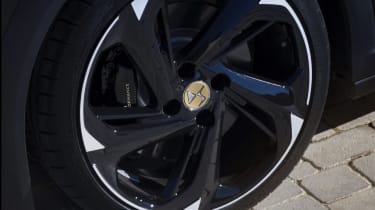 You’re greeted by imposing wing-back bucket seats which lift an otherwise unremarkable interior. It feels very much the same as before, right down to the in-built air freshener, but with nary a double chevron in sight this time round.

The pedals feel a little light and the clutch has a high, slightly indistinct biting point, but the gearshift feels reasonably precise and pleasing. At anything up to a vaguely brisk pace the DS 3 Performance feels rather promising in other departments too. The steering has a nice consistent weighting that matches the responses of the car and the ride, although quite firm, feels encouragingly focused.

The turbocharged engine doesn’t have the linearity of something like the Fiesta ST’s, but it revs pleasingly freely up to its limiter. It doesn’t have much character either but it never sounds harsh and there is no denying that it delivers its performance effectively if not remarkably.

There was a closed section of road on the launch in the south of France, which was fun. It was the sort of narrow, twisting stretch that wouldn’t have looked out of place on a Corsican rally stage and the temptation to test the robustness of the car’s sump with a few big cuts was almost too much. Sadly, whether on a close road or not, the DS 3 Performance rather deteriorated when driven with real enthusiasm. Any sort of resistance or feel in the steering seemed to disappear, particularly off-centre. This left you with a slightly unnerving feeling on the way into corners, because although the front end had decent grip there wasn’t any real confidence in it. As such it just felt rather imprecise, particularly in the tighter corners. The balance felt entirely nose led as well, with no hope of ever adjusting the tail of the car or even cocking an inside rear. 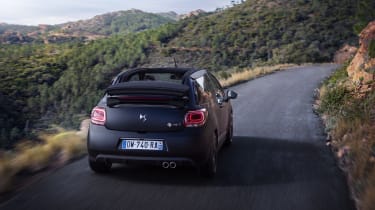 Through some of the faster sections where minimal steering input was required to thread it through the linked corners the car felt better, its flat stance and stability instilling confidence. The braking was strong too and, with the grip from the Michelin Pilot Super Sport tyres, the overall pace down the road was pretty high. The LSD also felt easy to manipulate and certainly helped drag the nose round corners as soon as you committed to the throttle.

An extremely brief drive (a ten minute loop from Toulon airport) in the cabrio version revealed that you can’t see anything in the rear view mirror when the roof is fully down, the steering is even lighter and there is quite a bit of shudder over bumps. Having said that, with some serious commitment it did finally manage to lift-off oversteer round a dusty roundabout…

Overall the DS 3 Performance is perfectly quick enough and you could probably extract a half-decent time around a track. But driven hard down a good piece of road it lacks the chuckability and joie de vivre that should be an integral part of any hot hatch. Particularly a French one.

The benchmark in this sector has been the Ford Fiesta ST. No doubt DS would claim that the DS 3 Performance justifies its higher price (it starts at £20,495 with the Black edition costing an extra £2000) by dint of being a much more premium product. There is that limited-slip diff too, although the new ST200 will soon match it on that front. The other clear rival is the one with the same engine – the Peugeot 208 GTi, which has a better ride but is also more fun to drive. Finally there is the Mini Cooper S, which still leads the way in terms of the premium, design heavy small hatchback market. The Mini Cooper S cabriolet is also the obvious rival for the £22,795 DS 3 Cabrio Performance, although at £22,695 a Mazda MX-5 2.0i Sport is perhaps a less practical but more stylish alternative. 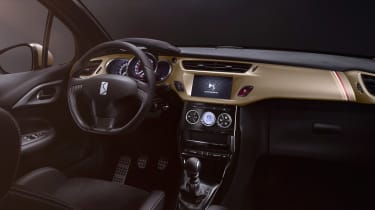 If you fancy having a watch to match your DS3 Performance then the BRM Chronographes edition is for you. In addition to the specification of the DS 3 Performance Black edition, you get matt Golden Pearl paint over large parts of the exterior bodywork and interior. You also get some BRM badging, premium carpet mats and Mirror Link with Apple Car Play (which is only a £100 option on a standard DS 3 Performance). And, of course you get a watch.

If you’re interested in such things, the watch in question is the snappily titled BRM V6 44 SA SQ DS 3 Performance. The 44mm diameter casing is stainless steel PVD with springs, while the hands are gold super light and the strap is black leather. It is water resistant to 100m and the Automatic movement is a Precitime. Only ten will be available in the UK, each costing £25,495, which is £5000 more than a standard DS 3 Performance.