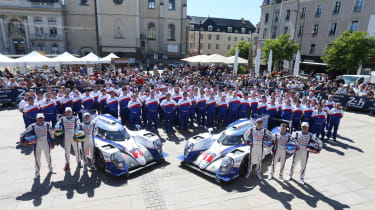 The 83rd Le Mans 24-hour race, run this weekend (13-14th June), looks set to be one of the great confrontations seen at La Sarthe.

As many as 14 LMP1 cars will challenge for overall honours, backed up by a quality field in depth throughout the LMP2 and GTE Pro/Am classes.

On paper, at least, you could be forgiven for thinking it's business as usual: defending champions Audi – who have won 12 of the last 14 races at Le Mans – have already taken both WEC rounds held so far this year.

But those wins were not without a thrilling battle against the Porsche team to the very last. So far, the 8MJ-class 919 Hybrid has proved the fastest car, certainly in a straight line and perhaps over one lap, but the Audi is more consistent over a whole stint, superb through the corners and formidable under braking.

Both teams have entered three cars apiece. There are no obvious weak links in any of the driver line ups, but Audi’s No7 R18 e-tron Quattro of three-time winners Marcel Fässler,  André Lotterer  and Benoît Tréluyer will surely be hard to beat. Porsche’s regular WEC crews – in special Le Mans red and black liveries – will be joined by a third car for Le Mans (in regular white livery) that includes Brit Nick Tandy and current F1 driver Nico Hulkenberg.

The other main contender remains reigning WEC champions Toyota, who’ve endured a rather low-key start to their 2015 campaign. Once again the Cologne-based squad will field only two cars, putting them at a numerical disadvantage, but the car is still fast and the team experienced, with strong driver crews in both cars. Will 2015 finally be the year for the Japanese constructor? 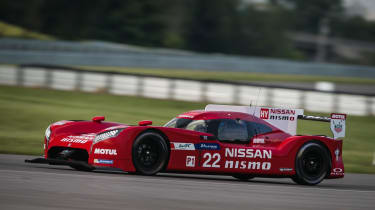 Talking of which, Nissan’s three wild looking GT-R LM Nismos finally make their debut this weekend. They’ve been a long way off the pace so far, and are unlikely to feature this year, but their presence bolsters the field significantly and has really caught the attention of the media and fans alike. As for the remaining LMP1 privateers – Rebellion Racing and the ByKolles squad – they face an uphill battle against the might of the factory teams, and will be hoping for a race of attrition to pick up a good result.

With 19 cars, the majority of which are now coupes, the LMP2 class offers both variety and fierce competition, with two car teams from WEC pace-setters G-Drive and last year’s class winners Jota Sport amongst the throng, as well as the attractive new Strakka Dome coupe.

In GTE, the battle is a closely fought four-way contest between Aston Martin, Ferrari, Corvette and Porsche in both Pro and the Am class (the latter requiring at least two of the driving squad to be graded as amateurs), with a lone Dodge Viper offering much-needed additional variety.

Racing gets underway at 3pm Saturday with the winner, 24 hours later, seizing the biggest prize in motor racing for 2015. Right now, it really is too close to call.