Mercedes plans to launch an F1-engined hypercar. Back in 1992, Yamaha had the same goal. 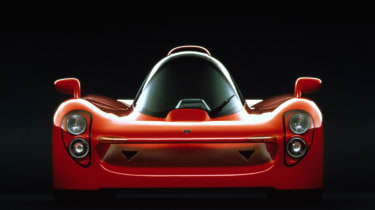 The most exciting element of Mercedes’ upcoming hypercar is that it will use a derivative of the Formula 1 car’s 1.6-litre turbocharged V6 engine.

Not that a 1.6-litre, turbocharged V6 is particularly exciting on its own, but so rarely can a road car boast an engine so closely related to a racing counterpart that the potential is enormous.

After all, these engines rev to 15,000rpm and are once again creeping towards the 1000bhp mark, with assistance from an electric Energy Recovery System. Even a toned-down motor, with road-car longevity, should be quite unlike anything else being developed for road use.

Of course, back when V8s, V10s and even V12s were the norm, such things might have been even more exciting. One car, the Yamaha OX99-11, undoubtedly was.

Consider that in 1992, F1 engine manufacturers were still allowed to propel vehicles with naturally-aspirated, 3.5-litre engines. Yamaha, which entered F1 as an engine supplier in 1989, used a 72-degree V12 dubbed OX99.

You can see where this is heading: at the heart of the OX99-11 concept was this very powerplant, albeit limited with a 10,000rpm crank speed and developing 400bhp – the race car was said to be around the 560bhp mark (over 100bhp down on Honda’s V10 of the era). 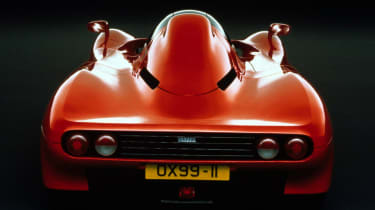 It was heavier than its racing cousin too (1150kg versus the F1 cars’ 505kg minimum) so F1-style performance was never likely to be on the cards; something that could well change with the new Mercedes and its competitor from Aston Martin and Red Bull.

OX99-11 was a joint project between Yamaha and International Automotive Design (IAD), a Briitsh firm linked to several higher-profile projects, including the original Mazda MX-5 and the quirky AZ-1 kei sports car.

A slim cockpit with two seats in tandem makes the latest hypercars seem almost conventional, and its aerodynamic design even more so – like the F1 cars with which it shared an engine, an overhead scoop directed air to the V12 while a large wing, sitting proud of the front bodywork, provided downforce.

Sadly, like so many blue sky projects, it was eventually killed by budget concerns – by the early 90s, Japan was exiting the economic bubble that provided the world with some of its most remarkable sports cars. Just three prototypes were built.

Who knows how it might have been received had it eventually made production – it would have debuted concurrently with Mclaren’s own F1 supercar. Today, there’s apparently a market for such vehicles, irrespective of cost – but it’s a shame a genuine F1 engine isn’t quite as exciting now as it was back in the early 90s.