Manchester’s close proximity to the Peak District reveals it’s crown jewel, the Snake Pass, ideal for a lightweight roadster like the Toyota MR2 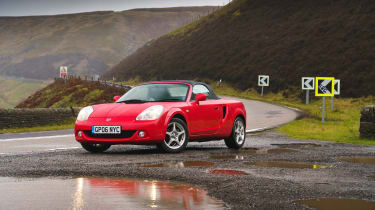 You’ve slogged through the eastern suburbs of Manchester, zipped along the few miles of the M67, and worked your way through Glossop, a town that sounds like a bubble of hot lava bursting. Then, before you’re clear of the houses, the road rises and you see green hills, then the first of many serpentine twists and turns… And the first of many 50mph limit/speed camera signs. But don’t lose heart.

This is Snake Pass, one of a handful of famous roads that cross the Peak District National Park that stretches from Ashbourne in the south to Saddleworth Moor in the north. The pass, part of the A57, comes in around top left and sets off across the map like a jagged bolt of lightning, heading for Sheffield 25 miles away. 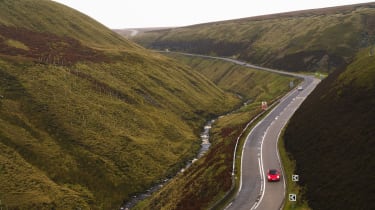 My disappointment at the speed limit quickly dissipates when I realise it isn’t going to be a cap on enjoyment. The last-generation MR2 I’m driving is a perky little thing, its 138bhp engine shouldering just 975kg, yet on the long, uphill sweeps that characterise this initial climb, the 1.8-litre four is pretty much wrung out. It’s a deceptive gradient and when it lessens we find ourselves out on the exposed, flat peak where the famous Pennine Way walking route crosses. Clouds come quickly from the right, wind noise spiking as the odd squall hits the canvas roof and spatters the side window with rain.

Photographer Dean Smith reckons there’s a shot here and I drop him off. In the few minutes he’s out there, the sky darkens then brightens, the rain stops and then starts, and when he’s fallen back in the car with rain-soaked jeans, the sun comes out. As they say in Iceland: if you don’t like the weather, wait five minutes. For a few moments, far behind us we can just make out Manchester’s tallest buildings in the mist. 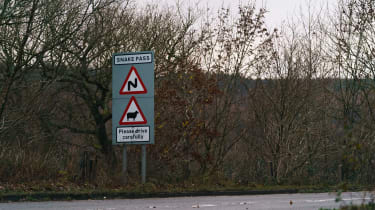 It’s refreshing to be reacquainted with the small, light MR2. I was expecting a bit more of a tune from the Toyota’s mid-mounted motor, this being one of the last 300 UK cars, a ‘TF300’, that comes with a pair of fat TTE tailpipes. There’s a more deep-chested sound from outside but the motor sounds standard from the driver’s seat. That’s a seat unique to the TF, trimmed in leather and Alcantara and with the limited edition number on the back. ‘TF’? Stands for ‘The Final’. Obvious when you know!

A topographical cross-section of the route like you see on Tour de France coverage would show that the A57 peaks early, hitting a never-again matched 512 metres here before descending to its lowest point at Ladybower Reservoir about halfway. It’s heading gently downhill for a while, then, and very quickly it becomes a whole lot twistier. The MR2’s steering is quite light, the car’s overall feel faithful to the location of the major masses. I’m alert to this, especially as this example is shod with dry-weather optimised Yokohama Neova tyres. I know they’re fine in the wet: I have them on my Capri and we have tyre-tested them too, but I need to get the measure of the MR2 on them. 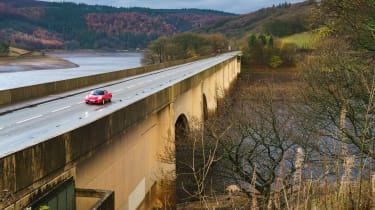 Turns out the light and nimble MR2 is quite brilliant. The beautifully surfaced, shiny wet road heads into the trees and starts to roll and dip, nip and tuck. Visibility dictates a moderate pace but the chassis of the little Toyota is a joy. You can feel through the steering wheel rim in fine detail when the front tyres just start to slip but you don’t back off, you simply factor it in. Occasionally the rear edges fractionally wide too, and you keep the throttle steady and work with it, all the while the asphalt rising and falling, its blackness fringed orange with fallen pine needles.

The reason it’s called Snake Pass seems self-evident, but the real reason is coming up on our left – the Snake Pass Inn. This hostelry was originally Lady Clough House, then later the Snake Inn, the name change inspired by a motif from the coat of arms of the sixth Duke of Devonshire, who helped fund the £18,625 cost of the road, which opened in 1821. Now the Snake Pass Inn, Dean is disappointed with it on two counts: first, that they’ve got rid of the distinctive gothic signage; second, that it’s closed. 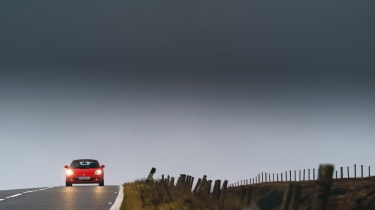 We press on and the corners keep coming. Driving the MR2 calmly on the edge and comfortably on its own side of the road is very satisfying. It’s a bit like one of those fairground games where you have to thread a metal loop along a twisted wire without the two making contact and ringing a bell. Ladybower Reservoir appears on the right looking almost totally drained, like someone accidentally caught the chain for the plug. The Ladybower Inn is open, thankfully, and feeds and waters us adequately.

On another day in another car the 50mph limit might frustrate, but I suspect not; this is a spectacular place, the views immense, the road always a challenge. The final shots bagged, I set my phone nav for home. To avoid Sheffield, the suggested route quickly turns north and I find myself on some incredible rollercoaster roads heading for Stocksbridge. Although minor, they are mostly perfectly surfaced, quite deserted and have glorious views of valleys and reservoirs bathed in late afternoon light. I’ll be back.

Not as wild and bonkers as the mid-engined Turbo, the Renault 5 GT Turbo was still a rather fine hot hatch
Visit/hyundai/i30-n-hatchback/201775/hyundai-i30-n-versus-hyundai-i30-tcr