True to its very literal name, it is the most powerful front-engined car to emerge from Maranello 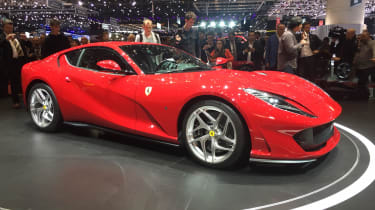 The Geneva Motor Show wouldn't be the same if Ferrari wasn’t showing off a new model — enter the 812 Superfast. Shoehorned into the front of the F12 successor is the most powerful petrol engine ever installed into a production Ferrari - with the exception of the hybrid LaFerrari.

The quirky name is done justice by the front-mid-mounted 6.5-litre V12 engine, churning out an eye-watering 789bhp which arrives in full at 8,500rpm. That staggering figure matches the output of the V12 component in Ferrari’s hypercar, the LaFerrari. 80% of the mammoth 526lb ft of torque is a prod of the throttle away from 3,500rpm onwards, with the full complement offered up at 7,000rpm.

The impressive spec sheet doesn't end with the power and torque figures. The 812 can hit 60mph from a standing start in just 2.9-seconds before ploughing on to a top speed in excess of 211mph.

The power is attained through means of a high-pressure, direct fuel injection system, rated at 350 bar and variable intake tracts engineered off the back of the Ferrari’s F1 expertise, that feed the twelve cylinders with vital oxygen. Power finds its way to the rear wheels via a revised dual-clutch gearbox that enhances throttle response.

Despite the front-engined layout, Ferrari promises the 812 Superfast will have handling and roadholding to match its mid-engined siblings. The car includes Ferrari’s Side Slip Control, as well as a system called Virtual Short Wheelbase. It's developed from the F12tdf's four-wheel-steering system, and the company says it improves nimbleness and reduces vehicle response times. The 812 Superfast is also the first Ferrari to be fitted with Electric Power Steering – a big departure from the previous electro-hydraulic systems. 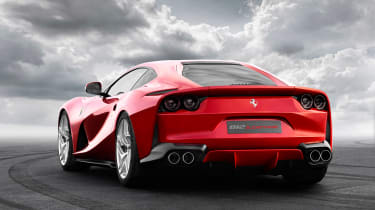 Of course, a Ferrari must look as good as it performs, and the 812 Superfast is wrapped in a gorgeous coupe body with a high tail reminiscent of Ferraris of old. Beefy wheelarches and sculpted flanks complete the look, and the whole affair debuts a special new ‘Rosso Settanta’ colour, marking Ferrari’s 70th anniversary.

Inside, the cabin is classic Ferrari, with a sculpted dash, minimalist centre console and the same control-laden steering wheel from past models.