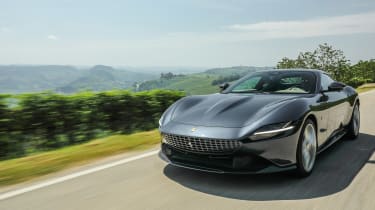 The cleanest-looking Ferrari for a generation, Maranello’s new entry-level GT is based on the drop-top Portofino but is barely recognisable as such, visually or dynamically. The shark-nosed two-plus coupe is a purer design than most of the company’s recent offerings and although it shares some underpinnings with the Portofino, including its front-mounted V8, its gran tourismo brief comes with a sporting edge.

The Portofino’s front-mid-mounted 4-litre, twin-turbo V8 has been revised for the Roma. Power rises from 592 to 612bhp thanks to higher valve lift and turbochargers with more accurate speed monitoring, matching the cylinder banks better and allowing an extra 5000rpm. The new exhaust combines GPFs (Gas Particulate Filters) with smaller catalysts and no silencers. Pipe lengths and diameters have been tuned to give the desired tailpipe noise and there is a load-sensitive bypass valve.

Instead of the Portofino’s seven-speed DCT, the Roma’s rear-mounted gearbox is a version of the new SF90’s eight-speed DCT, whose lower gears are around four per cent shorter for better acceleration, while the top gear is longer – very long-legged, in fact, for better cruising economy and refinement. The Roma is a tenth quicker to 62mph (3.4sec), 1.5sec faster to 120mph (9.3sec) and has the same 199mph+ top speed.

The Roma’s aero is mostly hidden, leaving the shape uncluttered. At the front, air passes under the splitter and is then channelled by a pair of vortex generators that help take the wheel wake more cleanly down the sides of the car. At the rear, there’s an active spoiler that has three positions and is activated by speed and the manettino setting.

The gearbox’s clutch units are more compact, lowering the height of the ’box and helping to lower the Roma’s overall centre of gravity. The essential chassis hardware is the same as the Portofino’s but the Roma’s structure is much stiffer, its wheel tracks are slightly wider and its bushing and tuning are bespoke. The static weight distribution is very nearly 50:50 (the Portofino is more tail heavy at 44:56) and it’s also lighter, by about 100kg at kerb. It’s also Ferrari’s first GT with a five-setting manettino, thanks to the fitment of electronic aids such as SSC (Side Slip Control) 6.0 and FDE (Ferrari Dynamic Enhancer). The HMI is all new too, much of it the SF90’s hidden-till-lit, touch-sensitive switchgear, plus its wide TFT instrument screen. 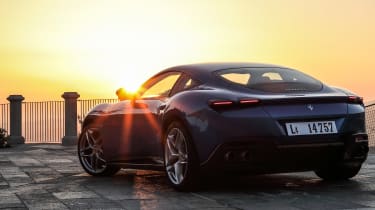 Nothing like a Portofino. For starters, it’s lower built; you drop down into it and the split-style cockpit surrounds you. Visibility is good, the width of the front defined by rising wing edges that, with the bonnet bulge, recall the 550 Maranello. Before driving, it’s worth spending a few minutes finding out where all the switches are and how to change and tailor the displays. There’s also a central screen that looks like a tablet wedged into the cleavage of the dashboard trim that can display nav and radio as well as the heating and ventilation controls. It feels overly complex for a car that at heart is a simple front-engined, rear-drive coupe.

There’s no start button, just a touch-sensitive switch, and at idle a deep burble spills from the Roma’s tailpipes. The first road we encountered was a cobbled surface and it passed beneath the 20-inch Pirellis with remarkably little fuss. This was the first demonstration of the Roma’s unexpected superpower: superb ride quality. Up in the mountains we found horribly frost-broken surfaces that ought to have made the Roma (and its driver) shudder but which didn’t jar or deflect it. Even better, this does not come at the expense of dynamic precision. There’s no slack to the steering response, which is quick but not nervous, and the handling is precise, which makes for relaxed, confident, fast progress.

The first time you give the throttle a decent squeeze – even in Comfort mode – the eagerness and strength of the pick-up is as forceful as you’d expect with over 600bhp on tap, something that could never be said of the Portofino. And the Roma handles like you’d hope a powerful, front-engined Ferrari would, too, with great balance and poise. Unexpectedly, it didn’t feel any stiffer in Race but given that it felt composed and sharp in Comfort, there was little to be gained. Grip is strong, the balance working front and rear equally, with the option to kick the rear out in ESC Off mode. In this setting, you have to be confident in the dry, such is the level of grip and traction, and you need to be on point in the wet; there’s enough torque to overcome traction at quite high speeds. The familiar bark of the flat-plane crank V8, the grip, and the kick when you floor it… you could think of the Roma as a slightly milder, front-engined F8 Tributo… 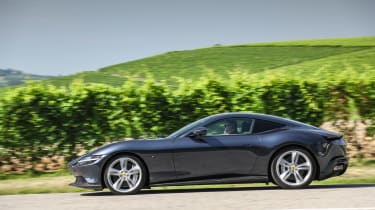 It’s a satisfying car to drive without goading the tail, of course, with dynamics that are direct yet calm and a ride that is endlessly impressive. A long day at the wheel confirmed the support and comfort of the seats, which combined with the ride and decent overall refinement earn the Roma its GT spurs. It was surprising to discover that the ride was much less impressive on the Michelin tyre option. The Pilot Sport 4 S is carried over from the Portofino unchanged and made the drive modes more distinct and prompted more use of the ‘Bumpy Road’ button, which I’d never used on the Pirelli.

The Roma is an engaging driver’s car that’s unmistakably Ferrari in nature, much more so than the Portofino, and thus gives a taste of things to come if you’re lucky enough to be able to climb the Ferrari ladder.

Nothing aligns directly with the Roma, which will cost £170k in the UK, but the similar-looking Aston Martin Vantage is definitely in Ferrari’s sights. Other possible rivals are the Mercedes-AMG GT, which is more sports car than GT, and the mid-engined McLaren GT. The Portofino is the Roma’s closest rival on price and accommodation but the two cars are completely different in feel and performance, and Ferrari is hoping that 70 per cent or orders will be from first-time customers.