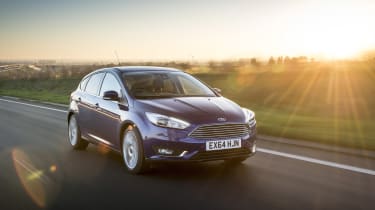 Meet the fourth-incarnation of the world’s best selling car, the Ford Focus. It’s the first Focus to wear the global (squint and it looks like an Aston) ‘One Ford’ design language, so earns a new exterior to match the Fiesta and Mondeo and a de-cluttered dash. Succeeding a car that outsold the mighty VW Golf and Audi A3, it’s more composed, more efficient and more refined than ever.

The good news is that the trend seems to have continued, as the Mk4 is both composed and refined, with a range of strong engines to power it. It’s just a shame that those engines are so thirsty – even the diesels fall short of their claimed figures.

The RS is, of course, evo's pick of the range. It's combination of technical engineering and powerful engine makes it one of the most exciting hot hatches on sale. The ST version of the Focus hasn't wowed us like the RS, but it's fast, competant and, available as an estate, so very practical.

However it's the non-performance models we're concentrating on here, but if you do opt for the more spacious estate (ST or not) you should seriously consider the optional reversing camera. Thanks to the car’s thick C-pillars, rear visibility isn’t so good – especially below the window line. The reverse camera is an incredibly useful tool to widen your view and is well worth its £165 price.

'Since Ford will be releasing an all-new Focus in 2017, expect the last Mk4s to be sold at significantly reduced prices. If you’re not desperate to buy now, waiting just over a year could help you save a significant amount of cash.’ (Sam Sheehan, staff writer).

Engine and Transmission > A six-speed manual or Powershift auto gearbox come mated to a range of EcoBoost and TDCi engines.

Ride and Handling > The Focus impresses with a pliant yet planted ride, though it can't quite match the dynamics of the smaller Fiesta.

Prices, Specs and Rivals > Though the Focus has long been a best seller, the Golf remains a class benchmark. The Focus' lower list price helps keep it competitive.

Interior and Tech > Ford has loaded the new Focus with tech. Tick a few options boxes, and the Focus becomes one of the most tech heavy cars you can buy this side of £40k.

Design > Ford's latest design language seems to have won over all - it's turned the Focus into a bit of a head-turner.