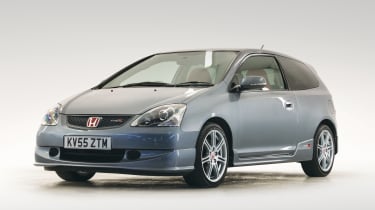 Guy Chamberlain at CPL Racing in Sheerness, Kent, has been servicing and tuning hot Hondas for a long time. He stresses the need for proper maintenance to keep the precision mechanicals ticking as they should, so find out as much as you can about a car’s maintenance history.

Maz Christofi at Honda tuning specialist Hond-R.com loves the EP3. ‘Brilliant cars,’ he says. ‘Best way to get into a hot hatch. Cheap, reliable, easy to fix, plethora of parts available. You go to any track day, there’s an EP3 there, because they’re cheap, reliable fun.’

So what do you keep an eagle eye out for? ‘Regular servicing,’ says Maz. ‘And monitoring how much oil it burns, because revving them hard will inevitably cause engine wear.’ So frequent oil checks are essential – if you’re buying privately, check the owner knows this. ‘Properly maintained, the engine is incredibly strong,’ says Maz. ‘We’re running a supercharged EP2 with 437bhp, standard internals. Phenomenal.

‘The only issue we see is with chains and tensioners. There’s no rhyme or reason to when they go. We’ve seen them fail at 80,000 miles, others go on to 150,000. It’s around a £650 job for genuine Honda parts and labour. Once that’s done, they go on forever. We look after cars that have done 180,000 miles and more. If you’re buying one with around 100k and it hasn’t had the chain done, for peace of mind budget an extra £650 and fit a chain, then you’re going to have hassle- free motoring.’

A light tappety noise emanating from the engine simply indicates the valve clearances need adjusting – part of the big, 72k service. The idle control valve needs seeing to If the car feels like it wants to stall when it’s warm – a simple fix.

Reluctance from the gearshift is not uncommon. Listen for a crunch when changing into second, especially in colder temperatures. So be wary if the vendor has pre-warmed the car. A particularly heavy clutch is also a red flag, this often signals it’s due for replacement.

Modifications are not necessarily a bad thing, rather good actually in the case of a limited-slip differential. Fitted by a reputable specialist it’s a big plus.  According to Maz ‘It’s the best modification that you can have done to an EP3, for fast road driving and trackdays,’ says Maz. Installing an LSD later on is easy enough with plenty of options available, starting from around £750 fitted.

Issues with the steering are well documented and are more prevalent on pre-facelift models, though many problems were rectified under warranty. ‘They start creaking and they don’t self-centre,’ says Maz. An OEM replacement rack will set you back four-figures, so finding a used one from a facelifted car is the shrewdest option. The suspension stands up strongly on the whole, the alloys though are rust prone, so check for any surface bubbling. Honda replacements are £250 apiece.

‘The build quality on these isn’t quite what it was on pre-2000 Hondas. You can tell the accountants were involved,’ says Maz. Despite the cheaper materials and their unpleasant tacitly, they’re screwed together well enough to warrant little concern. Of course check for signs of accident repairs and note that different shades of paint between the bumpers and the bodywork. This isn’t that rare doesn’t necessarily mean the car’s had a respray. Of course test all the electrics, including the air con, if present.

A beefier structure was sprung by lower stiffer suspension. The ‘breadvan’ nickname, courtesy of mini-MPV shape clearly didn't endear all. That said, the discrete bodykit, bucket seats and slim-spoked 17-inch alloys and garnishing of Type R decals lent it some appeal. Our initial impressions of the second generation CIvic Type R left us a little cold (evo 035), Dickie Meaden lamented the chassis that ‘lacked sparkle’. Unfortunately the huge shadow cast by our greatest front-wheeler of all time (crowned in evo095), the Honda Integra DC2 , loomed too large over the EP3. Despite the intra-family comparison with it’s legendary relative, you could not argue with the £15,995 price tag, that ushered in a healthy following.

A few special editions are worth keeping an eye out for: the pre-facelift 30th Anniversary (celebrating the Civic’s 30th birthday) and the post-facelift run-out Premier Edition. Recaros, air con and a Momo wheel were welcome additions. The supply of JDM spec car is on the rise as they become more sought after with importers gravitating towards them. These cars boast stronger internals, revised gear ratios, are freer breathing  and feature a LSD. The Recaro and Momo pairing are present too, thus all the extra kit carries a corresponding premium.

The EP3 CTR still holds strong adoration from a cult following – there’s a huge and supportive owners community, and a lively tuning and track day scene too – with good reason.

The £2000 entry point would yield an A1 car, but £2500 should certainly get you standard car, high mile car in working condition. The £3.5k - £4.5k affords you some cared for examples, including some facelifted models, though the best cars are north of £5k. The most coveted of the earlier models is the 30th Anniversary edition. Expect to pay at least £5k for a good one. The version many hold out for is the post-refresh Premier Edition which are punching £6k for the best examples.