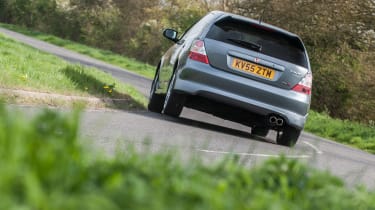 The EP3 generation Civic Type R is an unassuming little thing. Parked alongside the later FN2 generation Civic and the latest five-door, 306bhp Type R, its styling is positively restrained.

Don’t let this fool you. Hidden underneath its simple clean lines - often dubbed the 'breadvan' by owners and detractors alike - is a corker of an engine, with a well-sorted chassis to back it up.

It comes from a time when high-revving hot hatches were still relatively commonplace, a time when emissions regulations were lax enough that fuel-sipping turbocharged engines weren't yet necessary. Just a few minutes down a B-road in an EP3 and you’ll be reminded that just because a car is affordable - used examples start from as little as £2000 - it doesn’t mean it can’t boast a truly special engine.

And special it most definitely is. With an 8600rpm redline and its 197bhp power peak arriving at 7400rpm, the EP3 is a car that likes to be driven hard. It’s also worth noting that just like the new Type R, the EP3’s high-revving K20A2 engine once put it at the top of the pack for power. Nearly 200bhp was, at launch in 2001, a crazy number to put through two front wheels alone. 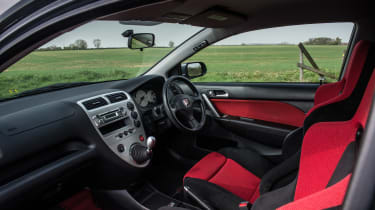 Two main attributes separate the EP3 from the subsequent FN2 Type R. The familiar VTEC 'kick' arrives later, at around 5800rpm, with the change to the new cam profile a little more distinct than that of its successor. It also rides better, remarkably so given the ride quality was rarely praised in early reviews.

This is partly thanks to the EP3 having independent, double-wishbone rear suspension rather than the FN2’s retrogressive torsion bar rear axle. We rated it highly at launch and it still deserves praise today - the EP3 feels smooth, has better body control and is just more sorted at speed than the later Type R.

Compare the two at rest though and the one-box styling and slightly dated interior of the EP3 do fade into the background. It shows how far the hot hatchback game has progressed, but the driving experience is enjoyable all the same.

The Civic was always one of the lighter hot hatchbacks, and time hasn't diminished that benefit. In a group test in evo 075 it was over 100kg lighter than its closest competitor, the Vauxhall Astra SRi Turbo, and its 1204kg kerb weight is 63kg lighter than the model that followed. The lack of mass facilitates a 6.4 second 0-60 time, but use all the revs and the EP3 actually feels quicker than that.