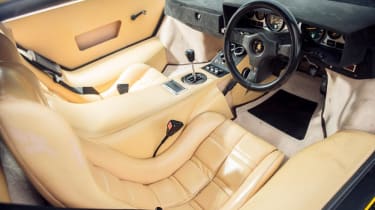 It’s hard to imagine anyone describing a modern Lamborghini as ‘not crazy enough’, but if such accusations can be leveled at the Huracan and Aventador then it’s cars like the Countach that are to blame.

This particular example is even more eye-catching than either of Lamborghini’s current production models, not least because of its vibrant colour scheme. The 1981 Countach 400S, on sale with Silverstone Auctions at Race Retro in late February, features a vivid coat of Lamborghini Pearl Yellow.

Combine that with the enormous rear wing (originally available as an option) and the iconic tele-dial alloy wheels, and there are few supercars more iconic.

The car was originally registered in September 1982. Its first owner, Tim Dutton Wooley, specified the car with its huge wing. The next owner, from April 1987, chose to remove it, though a subsequent owner once again returned the wing to its rightful home.

The yellow paintwork is complemented – however strange that sounds – by an oatmeal leather interior and a contrasting black suede dashboard top. The cabin looks largely immaculate, as you might expect for a car that has covered 38,221 miles since 1982 and only 1800 miles over the last few years.

Nick Whale, managing director of Silverstone Auctions, describes the car as ‘a car that every collector should take the opportunity to own at some point,’ adding that this particular example is ‘a fabulous piece of 1970s road art’.

The yellow Countach’s guide price is £200,000 to £250,000, though Whale suggests recent prices for other LP400s Lamborghinis mean this car could change hands for substantially more.

Other cars appearing at the Race Retro sale (taking place on the 26-28 February) include a 1956 Jaguar XK140 roadster and an ex-BMC Competition works 1985 MGA Twin Cam. With over a month to go before the auction though, other models are sure to join the lot list in the meantime.