For the times a Mercedes-AMG G63 just isn't quite imposing enough... 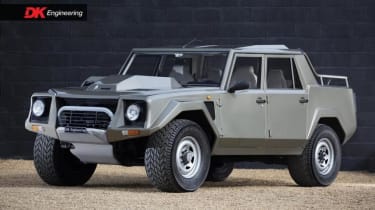 A conundrum: You’re wealthy. In need of a new car. Not just any car mind, but one with presence. A sports car might do it, but every man and his dog has one of those these days. No, you need something bigger. Brasher.

We imagine this is the kind of line of thinking that leads someone into cars like the Mercedes-AMG G63. The £131,000 of the model we tested this week would comfortably get you behind the wheel of an AMG GT S, but it’s hard not to imagine the G63 getting more attention.

How disappointed you’d be then to pull up at the lights – provided there was actually space – alongside whoever buys this Lamborghini LM 002 from DK Engineering, via Classic and Performance Car.

The ‘Rambo Lambo’ undoubtedly occupies a special place in automotive history. Unhinged even by the standards of 1980s Lamborghinis, the LM 002 was conceived as a military vehicle and, as with America’s Humvee, was quickly adapted for civilian use.

Most were powered by a 5167cc V12 producing 450bhp (at a most un-SUV-like 6800rpm) but weighed in at 2700kg, which blunts not just performance (though a 130mph top speed was quoted) but economy, since you’d be lucky to break into double figures in mpg terms. We managed around 14mpg in the G63, which might as well be a Prius in comparison.

Amazingly, Lamborghini’s legendary test driver, Valentino Balboni, was involved in the LM’s development – speaking in evo 016 back in February 2000, and doing his best to scare Harry Metcalfe senseless on a high-speed demo ride, he described his enjoyment of developing such an unusual vehicle.

Driving it anywhere near other traffic would no doubt be as terrifying as it would be for the other traffic themselves, and filling its 230-litre tank at modern prices would currently cost around £250.

But in relation to that G63, the price being charged for this example - £154,995 – almost seems reasonable given its rarity. For one-upping drivers of bright yellow AMG G63s, you might call it priceless.

> Find Lamborghinis for sale on Classic and Performance Car