The Murciélago, is spending some time in the workshop, though it’s not all bad news 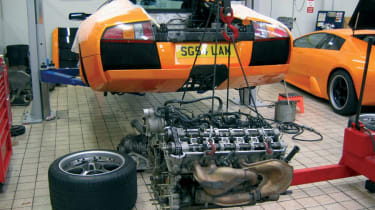 With the trackday season out of the way, the Murciélago is now convalescing at Lamborghini Manchester for a month, having some much-needed TLC lavished on it. With the engine out thanks to Lamborghini Italy’s generous gesture of authorising a new oil pump (despite the warranty having expired), I’m going to take the opportunity to get a few extra jobs done.

A new clutch plate is top of the list. The last one was fitted at around 27,000 miles, so replacing it would seem like a sensible precautionary measure because, while the plate itself is relatively cheap, removing the engine to fit it isn’t.

Also on the cards are a couple of tweaks to wring a few more bhp from the 6.2-litre V12 – not something that I would have considered when the warranty was in place as it could have resulted in an expensive claim being refused.

First up are the air filters. Tuning specialist Tuningwerkes (www.tuningwerkes.com) has just started importing BMC sports air filters for both of the current Lamborghini models, and feedback from Gallardo owners suggests they offer a huge increase in induction roar and far better airflow.

Secondly, Scuderia Systems (01784 434395), sole UK distributor of Tubi exhausts, will be letting me test some sports cats it is experimenting with. This is as close as you can legally get to no cats at all, and if a friend’s Gallardo is anything to go by will doubtless result in the Murcie spitting two-foot-long flames and sounding like a highly tuned racer. The Lambo bods will also be adjusting the mixture to run rich, so the resulting flames should brighten up those long winter evenings!

Another job I’ve had done recently was to get authorised Zymol detailer Dave Bowerman (www.sportscarprotection.com) to work his magic on the Lambo’s bodywork. Using the latest techniques and compounds, he managed to rid the paint of all the swirl marks and scratches it had collected over the last year, before finishing off with some seven-grand-a-tub (!) Royale wax. To say it has made this hard-worked Murcie look like new again is an understatement. OK, it may have cost £500, but it was two full days’ work!

Regular readers may recall how I’ve had at least six replacement hinges for the movable scoops situated on the Murcie’s flanks. Partly my fault, I’ll admit, as I can’t resist moving them up and down manually at any opportunity. Well, quite by accident I recently discovered that it’s possible to keep them in their raised position, even with the engine off, via the battery isolator switch. Fantastic! The only downside is the number of coffee cups that find their way down there…

Anyway, I can’t wait to get the Lambo back with its new bits on. And at least I won’t need a barbecue at Le Mans next year!