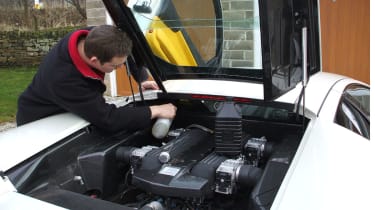 It’s been a rollercoaster ride for LP07 recently, what with one thing and another, so I’m hoping for a new year without quite so many incidents. Famous last words? Just recently the big V12 developed a tendency to cut out on roundabouts or sweeping bends.  Thinking it must be a blocked fuel filter or similar, I decided to check all the fluids, including the oil, which I hadn’t for a month or so.    This last procedure isn’t the easiest task to carry out on a Murciélago since the dipstick and filler cap are located at the very front of the engine and become a little hot to say the least. Since the LP640 is also dry-sumped, it has to be carried out when all 631 horses are at operating temperature. After burning my paws as usual and creating smoke signals after spilling oil on the hot cats, I was a touch nervous when I couldn’t locate any of the shiny stuff on the dipstick. My nervousness increased when I still couldn’t despite adding 2 litres of Agip’s finest! Four litres later and at last I had a reading just below minimum, but I couldn’t help thinking this was another potentially very expensive near-miss after the recent towing fiasco. Lo and behold, the cutting-out on corners ceased immediately.

Driving the LP640 almost daily, it’s easy to forget just how rapid this rocketship is. Its staggering acceleration – especially above 100mph – is something I’ve never taken for granted, and the howl from the V12 over 5000rpm is utterly fabulous. It’s a big bus of course, weighing in at nearly 1.7 tons, but in my book this works to its advantage: with its four-wheel drive hooked-up, the big Lambo feels almost ‘planted’ on the road, which always inspires confidence.

It’ll be going into the paintshop soon. All the bottom panels plus the bonnet and wheels are due for a bit of cellulose ready for the summer. Lamborghini will bear some of the cost since the lacquer has separated from the paint in a couple of places, so I’m hoping it’s not going to hurt the wallet too much. At least it costs less to fill up with fuel these days – about £80 or so, a welcome change from £110ish a few months ago.

Finally, I’m pleased to say that LP07 will be joined by another 12-cylinder leviathan next month. Clues? It weighs about the same, but it’s not Italian. Answers on a postcard…