Simon George's Murcielago has had a good run, but on the way to the London Lamborghini centre drive-belt-shaped disaster strikes 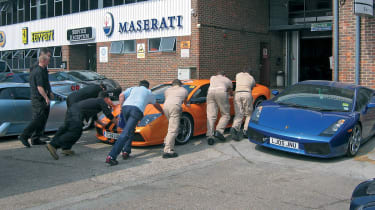 I've been meaning to ask his Harryness for some time whether his Zonda responds positively to a good dose of Italian opera belting from its speakers. I’m almost certain that the Murciélago’s V12 ran even sweeter when accompanied by the dulcet tones of Andrea Bocelli being played at high volume. However, I’m sorry to report that even Bocelli couldn’t save the V12 from a recent disaster that saw SG54 and myself arrive at its intended destination – Lamborghini London’s service centre, ironically – on the back of a truck.

Back in the middle of 2006 I sang the praises of the Lambo’s unstinting reliability, only for it to break down for the first time ever the month after. The fault then was a bent pulley on the end of the crankshaft – cause unknown – which, to its credit, the factory agreed to repair as a gesture of goodwill because the two-year warranty had only just expired. Even so, when I once again sang the big Lambo’s praises last month, I really should have kept it off the road for a while. And especially on Friday the 13th.

However, Sean Knight from Lambo London had suggested SG54 might benefit from being put through its paces on the company’s new computerised jig. Apparently it’s worked wonders for fellow Lambo owners whose cars’ set-ups have been upset by city streets and their associated speed-bumps. I figured it wouldn’t do any harm to get my car checked over, so on a rare day off work I found myself setting off from Leeds, expecting to arrive in London just a few hours later.

The first indication that something was amiss came around Junction 12 on the M1 when a loud ticking noise started emanating from the lump behind me. Glancing in the mirror a couple of minutes later I was reminded of the images of burning oil wells in Iraq – I couldn’t see anything for the black clouds. Seconds later the dash lit up like a 747 about to stall. Game over.

Knocking the gearlever into neutral, I cruised down the slip-road of Junction 11 with no power steering and the brakes needing a bigger shove than usual. Fortunately I found a fairly quiet spot and debated who to ring first. The smoke had abated, so at least it wasn’t going to be the fire brigade.A look under the engine cover confirmed my suspicion: the Lambo had chewed its drive belt again. The smoke was the result of bits of rubber melting on the exhaust.

A couple of hours later a private transport company had deposited me and the Lambo in North Acton. Fifteen minutes after that came the news I was dreading: the cause was the same as last time. The pulley on the end of the crankshaft had bent again, throwing off the belt in the process. The cure? With fingers in my ears I tried not to listen as it was explained that this time a brand new crankshaft would be required, necessitating a bottom-end rebuild. Estimated cost: around 15 grand. More or less the price of a new Clio 197…

Fortunately Lambo London has given me some hope, putting in another goodwill claim on the basis that the first repair didn’t prove effective. I’m now praying to the Roman gods while I wait for the phone to ring with Sant’Agata’s answer.

It’s hard to be philosophical at times like this, and easy to be critical, but the fact remains that SG54 has 43,000 miles under its belt and has spent a solid eight hours out on track on 24 separate occasions. It could be argued that that’s not normal usage, but even that thought doesn’t make me feel much better.

By the time you read this, the decision on the claim will have been made. If it’s a thumbs down, then I’ll seriously consider getting SG54 back to Sant’Agata, where the labour rates are half what they are here in the UK. Depending on the price, I may get the brakes upgraded to the later-spec ‘Gallardo type’ set-up too. But that decision is for another day. Right now I’m just gutted to see such a fabulous machine on the ramps. Especially as it may not be gracing these pages for much longer…