Land Rover is producing a limited run of Defenders fitted with a 399bhp Jaguar-sourced V8 engine. 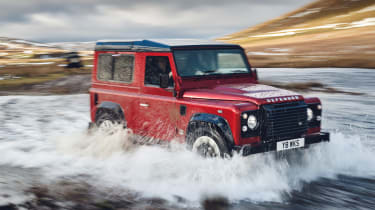 Land Rover is celebrating its 70th birthday with an outrageous 399bhp Defender. Called the Defender Works, it will be strictly limited to 150 examples, with prices starting at £150,000 for the short wheelbase 90 (there will also be the option of the longer, seven-seat 110).

Production of the Defender officially ceased in 2016, meaning construction of the Works will be undertaken by the recently established Land Rover Classic division, which will build up the cars using specially selected donor vehicles.

The biggest mechanical change to the Works is under the Defender’s bluff nose, where you’ll now find a naturally aspirated version of the supercharged 5.0-litre V8 already used in the Range Rover and Range Rover Sport. Delivering 399bhp and 390lb ft it’s enough to propel the Works 90 from 0-60mph in laugh-out-loud 5.6 seconds before powering on to an electronically limited top speed of 106mph. The V8 unit is mated to ZF eight-speed automatic, which drives a permanent four-wheel drive transmission that features a low range function for serious off-roading.

The Land Rover Defender Works V8 has 399bhp and a hefty price tag too. www.evo.co.uk/land-rover/defender/20641/land-rover-defender-works-celebrating-70-years-of-the-iconic-model

However, given the car’s performance potential, Land Rover has attempted to make the Works as adept on the tarmac as it is in the rough. The original model’s live axles are retained front and rear, but the springs, dampers and anti-roll bars have been beefed up to cope with the increase in power. The same is true of the brakes, with 335mm discs and four-pot calipers featuring at the front, with a 300mm two-pot set-up used at the rear. That said, the combination of the standard car’s recirculating ball steering and chunky 265 section all-terrain tyres suggests the handling will be as far from sportscar sharp as you can get.

Equal attention has been lavished on the interior, which features Windsor leather trim for the Recaro seats, dashboard, headlining and door cards. Also included is Land Rover Classic’s own sat-nav and infotainment system.

> Click here for our review of the Range Rover

For Defender owners and fans that can’t stretch to the full Works V8 shouldn’t be disappointed, as Land Rover has revealed it will soon launch a series of upgrades inspired by the 70th Edition. Included in the proposed modifications will be power boosts for the TDCi diesel engine and a number of ‘fast road’ suspension and braking kits.