The Range Rover Sport gets a cleaner, more powerful SDV6 diesel engine for 2012 and evo's driven it 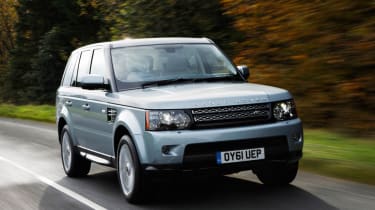 The overwhelming majority of British Range Rover Sports are diesel-powered, and there are now two different states of engine tune for the popular 3-litre V6 oiler. The more powerful of these is badges ‘SDV6’ and comes with 253bhp – 15bhp more than before – although torque, an impressive 443lb ft, stays as before. As you’d expect these days, the CO2 rating also drops from 243g/km to 230g/km. The less powerful version, badged ‘TDV6’ is even cleaner, with 208bhp, 384lb ft of torque and an official CO2 score of just 224g/km – giving lower tax bills.

The quest for lower CO2 is also helped by the introduction of an eight-speed ZF auto gearbox, which gives even more relaxed cruising thanks to a very tall top gear. The transmission can also save fuel by selecting neutral invisibly when stationary in traffic – and changing gears in a swift 0.2 seconds.

As the incremental nature of the changes suggest, it’s very similar to the previous model. You’ll struggle to spot the presence of the extra power under acceleration (the claimed 0-62 time drops by 0.3 seconds to 8.5 seconds.) What you will notice is all the extra cog-swapping as the eight-speed ‘box does it’s thing. Sticking the gearbox in ‘Sport’ helps to calm things down, but the gearbox’s indecision can start to get annoying on give-and-take roads, as you can get caught out waiting for the twin turbos to spool up and the transmission to decide which ratio to go for. You can, of course, swap to changing gear via the paddles hiding on the steering wheel - but you shouldn't really need to.

It's the class-leading refinement that impresses most on the 2012 Range Rover Sport, which now rivals the even-plusher Range Rover when it comes to feel good factory behind the wheel. Thanks to clever anti-roll technology, cross-country pace is astonishing for such a heavy, diesel-powered SUV. But it’s the depth of its ability which puts the ‘Sport ahead of rivals like the BMW X5, particularly when the going gets muddy. Put simply, the Sport can plough on when rivals simply slither to a halt.

Land Rover has finally introduced an electrically-powered tailgate that opens automatically via a button on the dash or on the key itself, closing it again is simply a matter of pressing another button on the bottom of the tailgate. It may seem a minor thing but the 'wobbly' tailgate previously used (which left owner's hands covered in grime) has been a constant annoyance since the car was launched almost six years ago. Made of aluminium, the new one-piece tailgate weighs 11kg less than the old two-piece version.