The 1972bhp, all-electric Evija hypercar has been shown testing for the second time 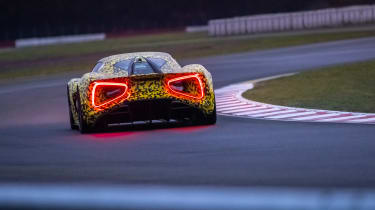 Following its debut in the Middle East earlier this year, Lotus has released more images of the model undergoing a second round of testing at its Hethel facility earlier this month. The all-electric Evija marks the beginning of a new chapter for the brand in the wake of its purchase by Chinese automaker Geely in 2017.

The first all-new Lotus to be launched under Geely’s ownership, Evija is a bespoke £1.75m (+taxes) all-electric hypercar that will act as a halo model for a new Lotus range. The upcoming models will eventually lead to replacements for the existing Elise, Evora and Exige, changing the brand’s lineup entirely.

The recipe might not sound like a particularly original idea - the electric hypercar market is filling fast with models planned by Pininfarina, Nio and McLaren - technical specifications are still equally impressive.

Using the second and most advanced prototype yet, Gavan Kershaw, British GT racing driver and Lotus’s Director of Attributes put the Evija through its paces once more. The latest mule is said to be complete with production-spec suspension, seats, interior components and elements such as the hydraulics for active aerodynamics, though the powertrain and chassis are still yet to be finalised. 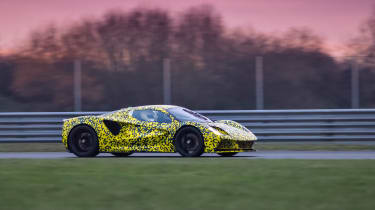 Kershaw commented: 'The car is in a completely pure state at the moment, with no stability control or torque-vectoring. This is so we can evaluate the fundamentals of the chassis, to create the mechanical advantage before the other layers, such as the electronics, are added. It means we can really read the car.'

It seems Lotus is well aware of the need for its trademark handling characteristics, even with the arrival of an entirely new powertrain type. 'Lotus has always been about ‘input = output’, so if you do something you get a response, and that’s what we’re balancing now. It’s also about bringing in experience from other vehicles – what we know from driving Exige and Evora, the Lotus GT race cars – and making sure that core Lotus DNA is all at its absolute best in the Evija,’ said Kershaw.

The Lotus Evija is powered by four electric motors, each with a projected power output of 493bhp and each connected to an individual wheel, making the Evija the first all-wheel drive Lotus. The combined output is 1972bhp, with 1255lb ft of torque available from zero-rpm - as with all electric cars.

Feeding these four motors is a battery pack mounted behind the seats, which Lotus says is the most power-dense and advanced of its type. The total battery capacity is rated at 70kWh, and will give the Evija a theoretical range of 250 miles on the WLTP cycle. 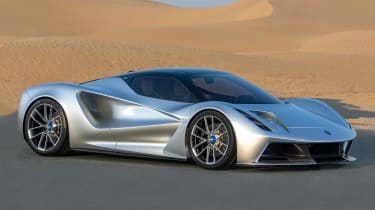 Those batteries have also been designed to support up to 800kW charging, a level that would result in a recharge time of the battery pack in as little as 8 minutes, if a charger with that capacity were available. As of now, the highest charging capability allowed on the car is 350kW, which will power-up the Evija’s batteries to 80 per cent in as little as 12 minutes.

Lotus has announced targeted performance figures too, with the 0-62mph figure of under three-seconds expected, while the 0-186mph time is an even more impressive sub-9sec. The Achilles heel of electric hypercars is always excessive weight, but Lotus has revealed an expected figure of around 1680kg in the car’s most focused specification, heavy for a Lotus, but still less than many rivals of similar type.

Underpinning the Evija is a full carbonfibre monocoque chassis, constructed by carbonfibre specialist CPC in Modena, Italy. The one-piece moulding not only houses the cabin and connection points for the front and rear subframes, but will also have part of the underbody aero pack moulded straight into the tub’s underside. Suspension is ttraditional in-board coilovers, while the steering system is an electro-hydraulic unit, an encouraging sign considering it would have been a far easier exercise to fit a more usual EPAS system.

The Evija’s styling is typical of a top-tier supercar, with elements borrowed from other historic Lotus models, but reinterpreted for a modern, electric hypercar. Like many cars at this level, aero has played a big role in informing the shape, with large openings in the bodywork facilitating both aero and requisite cooling. It’s arguably dominated by its venturi tunnels that puncture right through the bodywork, slip behind the rear wheels and open out from the tail, helping create downforce without the need for drag-inducing wings and dive planes. There is still an active rear wing, mind, with an integrated drag-reduction system (DRS), much like the one on a Formula 1 car. The graphics are bold, complex and interesting, but perhaps lacking in the innovation or drama of something like a Aston Martin’s Valkyrie.

Inside the Lotus takes a similar design approach, with the Evija looking every bit the modern hypercar, with a driver focused and pared back ambiance offset with plush materials and a delicate use of sculptural carbonfibre. The steering wheel is compact and loaded with controls in much the same way as a Ferrari or Ford GT. Otherwise the only digital interface is in front of the driver, viewable over the top of the small steering wheel for an effect not dissimilar to Peugeot’s i-Cockpit. 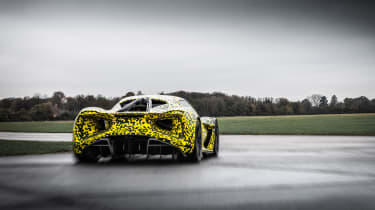 If this all sounds very futuristic, it’s because it is - a distinct change from the aged, yet still intrinsically pure, model range that Lotus has offered for over 10 years now. With 130 units destined for production in Hethel from 2020, the Lotus Evija will play the halo product role for the company, but whether it will exhibit the characteristics that have made Lotus’ models so special over its 61-year history remains to be seen.

If this seems like a big ask for a small brand like Lotus, it’s worth remembering Geely has serious form in transforming historic European brands, such as Volvo, from a niche counterpoint into a major premium player. Let’s hope that momentum continues with one of Britain’s most iconic and often innovative sports car companies.