The GranTurismo was nigh-on perfect, but a cold calculation based on the car's depreciation had to be made... 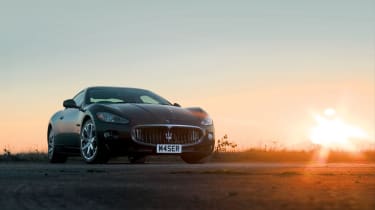 Life just isn’t the same any more. There’s an empty parking space outside my office and I’m not at all happy about it. Only last week my Maserati GranTurismo sat there, but in a fit of madness I decided to sell it. Talk about head ruling heart, but it seemed to make sense at the time…

It was back in March 2007 that I placed a £5000 deposit with my local Maserati dealer for a GranTurismo. Wind back even further to early 1998 and I very nearly did the same with the then soon-to-be-released Maserati 3200GT. Circumstances intervened at the time and I launched a car magazine instead, but with the GranTurismo the timing felt perfect. I’d first clapped eyes on the model at the Geneva show, and it was love at first sight.

Visiting the car configurator on Maserati’s website became a daily ritual from then on, so when the time came to finally spec my car last September I could have done it in my sleep. Learning from painful previous experience I went fairly easy on the options (I never seem to get the money back when the time comes to sell), picking only my must-haves, namely Skyhook suspension (after being impressed by the ride on an early press car thus equipped) and a special paint colour, Grigio Palladio, which shows off the car’s curves beautifully.

A couple of months later my GranTurismo was finally ready, and as I’d ticked the ‘factory collection’ box at the time of ordering, a flight to Bologna was booked for December 17 so I could bring my new baby back to the UK myself.

Factory collection is a great way to introduce yourself to a new car – the blast across Europe is so much better than a shorter drive on home turf. In this case it also revealed a couple of nice surprises. One was the potential range between fill-ups – over 400 miles was easily possible, which would prove really useful on my 130-mile daily commute. The other was the seats, which seemed superb (despite what I’d seen written elsewhere), proving extremely comfortable over long distances despite feeling initially unyielding when you first clamber in.

Once back in the UK I booked the car in to get some minor problems I’d noticed attended to. There was a badly fitted piece of trim in the passenger footwell, the satnav needed a software update (it had had a ‘moment’ while crossing France) and some rusty wheelnuts needed replacing.

Over the next few months some other minor irritations came to light, chief amongst these being the standard-fit NavTrak system. The idea is that if the system thinks the car is being stolen, it will notify NavTrak who will call your mobile to check if this is actually the case. Trouble was, I received a call every time I drove the car – sometimes several times during the same journey! It seemed that the credit- card-sized identity tag you’re meant to keep on you every time you use the car didn’t always connect with the NavTrak system, causing an alert to be triggered. To get round the problem I ended up leaving the tag permanently tucked in the sunvisor…

The satnav continued to be a problem too. It just wasn’t that great for navigating. If you just wanted to go to the centre of a village or town or city then it would work fine, but if you needed to go to a specific street and property number it was next to useless, as you could only enter the first part of a postcode as a destination. A basic TomTom could run rings round it.

The absence of some sort of Bluetooth phone connection, even as an option, was something of a disappointment for a car in this class too, but on the plus side there was a 30GB hard-drive installed, ready and waiting to record your CDs, giving you all the flexibility of an iPod without the need to make any connections.

As the GranTurismo arrived in the middle of winter it meant I be would be covering plenty of miles at night in it, so it was a relief to discover just how good its headlights were. In fact it seemed Maserati had really done its homework perfecting its directional lights – I found they always pointed exactly where I was heading. It’s one of those technologies that, once experienced, you can’t imagine being without. And unlike with many a BMW, they come as standard equipment on the GranTurismo.

I only occasionally drove the Maser four-up, and while our 12-year-old twins loved the rear seats and had plenty of room to make a mess in, they did complain that they couldn’t see out of the side windows, which occasionally made my daughter feel car-sick. There were no such complaints up front, however, where it always felt like a very special place in which to travel. The swoop of metallic trim dissecting the classy dash was a masterstroke to my eyes, and I loved the way there was loads of oddments space available too, especially the grippy rubber surface in front of the gearlever – perfect for stopping mobile phones sliding around during enthusiastic driving.

And I have to say that I really loved driving this car. Yes, there were a few niggles – the lackadaisical feel of the brakes being the biggest disappointment for me – but they were all made up for by that brilliant engine. I never got tired of hearing it howl to its heady 7500rpm red line, nor of the way the XF-sourced auto gearbox could execute seamless shifts in auto mode and super-quick ones when I used the paddles (the fact that the new GranTurismo S reverts to an automated manual transmission would put me off even considering one).

Then there was the way the car transformed itself when the ‘Sport’ button was pressed. Once selected, sixth gear was out of bounds, the damping became firmer and the gearbox would downshift instantly if, say, you went for an overtake, and also downshift more aggressively under braking for a corner. It really was one of the best-judged sports settings I’ve ever encountered.

The GranTurismo has minimal servicing requirements (it needs a basic service every 12,000 miles, but things like the plugs wait until 72,000 miles!), and the only service I had done was at 12,000 miles at a cost of £966. Other than that the only expenses were fuel – which at an average of 22.7mpg was around 10 per cent better than I anticipated – and tyres. Needing to replace the original Bridgestones at 9000 miles seemed a bit premature to me, but then the Pirellis P Zero Rossos I changed to looked like they were going to last a fair bit longer.

After living with a GranTurismo for six months I’ve got a clearer idea of its true character – and what its natural rivals really are. The list price may suggest that it’s a 911 or Aston Vantage rival, but it feels to me as if it’s actually up against the likes of the Bentley Conti GT and Aston DB9, delivering a proper GT experience but for around two thirds of the cost. That’s backed up at the showroom too, as the Bentley is the most common trade-in. And, according to the dealers I spoke to, once they’ve taken the plunge, GranTurismo owners seem universally happy with their purchase.

I only wish I was still one of those owners, for the GranTurismo was as close to being my perfect everyday car as anything I’ve ever had the pleasure of driving. In the end, though, it was a cold calculation based on the car’s value now and in the future. For once, head won over heart, but I wish it hadn’t.