As of the 2019 model year update late last year, Mazda introduced a heavily updated 2-litre four-cylinder engine. Overall the engine is similar to the last one, but now produces a more substantial 181bhp, and revs 500rpm harder at the top end too.

This extra performance is not only by feel, but on paper the numbers are now far more impressive too, the new 2-litre reaching 62mph in 6.5sec, a 0.4sec improvement over the previous 2-litre model. But the new 500rpm-worth of revs is just the start of the new 2-litre’s improvements, as rather than being strained, the new engine relishes revs, even if it lacks the outright, hard-hitting top-end punch of a VTEC. It sounds much better too, with a twin-cam engine note under hard acceleration that evokes classic naturally aspirated sounds one might usually associate with days gone by.

Combine this with the MX-5’s lightweight chassis and small footprint and the new 2-litre models feels genuinely quick in a way the previous versions never did. Build some revs and drop the clutch and it will rip superbly controlled burnouts, and this is an MX-5 remember, not an M3... in the wet, this hooliganism is multiplied. 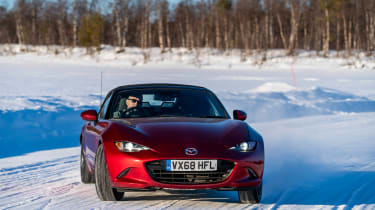 The 1.5-litre car dismisses the 0-62mph sprint in 8.3sec, while top speed is 127mph. But the 1.5’s performance differs more than the numbers suggest, feeling revvy and fun, but undeniably slow. The 1.5-litre car needs working – it's particularly noticeable on steeper hills when you'll need a downchange to maintain momentum, unlike the 2-litre car which charges up unhindered.

Being heavier it’s no surprise the RF is marginally slower than the soft-top version. The extra 40kg that the 1.5 MX-5 carries around means that it accelerates from 0-62mph in 8.6sec – 0.3sec slower than the regular car.