Both of the MX-5’s engines are from Mazda’s current selection of Skyactiv units, but they have both been revised for use in the sports car. The old, entry-level Mk3 MX-5 used a 1.8-litre MZR engine, but that has been replaced by a 1.5-litre motor that weighs 14kg less. Compared to this engine’s use elsewhere (it's available in the Mazda 2 supermini), it features revised cam timing, lighter rotating parts, a custom steel crankshaft and new intake and exhaust systems, while retaining the 4-2-1 exhaust manifold.

The 1.5-litre MX-5s dip under the magic ton at 975kg without a driver (2-litre cars weigh an extra 55kg), which helps to offset the rather effete 111lb ft of torque, generated at a lofty 4800rpm. With peak power of 129bhp generated at 7000rpm, it’s obvious that this engine will need to be worked hard. And so it proves, but as long as your expectations aren’t set too high it has plenty of appeal.

The new 2-litre, as mentioned previously, has undergone a substantial update on the previous unit, with a nuanced and technical approach, such as delicate weight savings to the pistons and conrods, revised camshafts, exhaust valves, injectors, throttle valves and a new intake. All of these subtle changes make a huge difference though, with the new engine having far more urgency at high revs, leaping to its 7500rpm red line with real verve. When still box-fresh, these motors have a tendency to feel a little tinny and tight, but with miles the engine really loosens up and feels every one of its 181bhp. 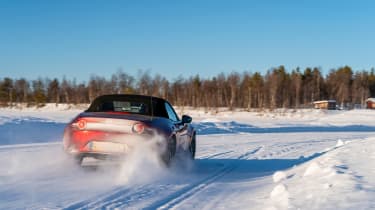 Both engines share the same six-speed manual transmission, which has a wonderfully short, mechanical action. Directly poking straight out of the transmission, there’s an acute physical connection between the gearbox and your left hand, passing through vibrations and movements as the whole powertrain moves on its mountings. This is by no means a criticism, but a pleasant reminder of what is becoming a very rare combination of a longitudinally mounted, rear-driven sports car with a manual transmission.

The box’s ratios feel much better suited to the bigger, torquier 2-litre engine. You spend much more time trying to keep the revs in the very top portion of its range in the 1.5, so if a gear causes the revs to drop too far the smaller engine’s performance deficiencies become glaringly apparent.

But the wonderful gear change and responsive engine, matched by excellently spaced pedals, mean that changing gear is a pleasure in itself – especially heel-and-toe downchanges. Although you have to stir the ’box constantly in the 1.5, it’s no real chore to do so. In fact, you make almost as many changes with the 2-litre, just for the fun of it.

There is an automatic gearbox available, and it comes with steering wheel-mounted paddles, but it is only available on the RF.