The MX-5’s interior has always been a squeeze for taller drivers, and the ND’s is no different. The cabin is both quite narrow and short, meaning drivers with generous proportions in either direction will find the MX-5 a little challenging.

This is only exacerbated by the seating position, which despite the generous drop on entry, still sits too high in relation to the rest of the cabin. It’s not likely helped by the compact dash and low windowline, but it still feels like the ideal hip point is probably an inch or so lower than the seat can go, making one feel almost perched atop the MX-5, rather than nestled within. The seats themselves are also disappointingly flat and unsupportive.

Once inside though, the cabin design is a marvel of contemporary minimalism, essential controls are reduced to a bare minimum and those that remain are clear and easy to use. It does lack the opulence of Mazda’s newer cabins, such as in the new Mazda 3, but remains a strong element of the MX-5’s overall package. 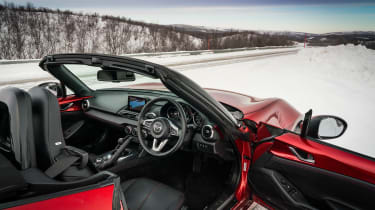 On the move, the experience inside is dominated by two perfectly formed elements. The first is the round, thin and firm steering wheel that looks and feels perfect in the hands, and the other, three perfectly placed dials in front of you. The left-hand dial is one solid colour screen in high-specification models, and although it doesn’t have a huge amount of functionality, it re-emphasises the work Mazda has been putting into its detailing.

The infotainment system is also rather good – maybe not up to the standards of the very best German units, but far superior to anything else from Japan. CarPlay and Android Auto are now also available as an option. A higher-res screen in the dash would be welcome, but as the MX-5 is now one of the older models in its range, it’s not surprising to see it a generation behind Mazda’s latest electronic hard and software.

Most models have a black interior in cloth or leather with red stitching and highlights on the dash and doors, but plump for GT Sport Nav+ models and the interior changes regardless of exterior colour. RF models feature a saddle brown interior, while the roadsters pick up a cornsilk-like beige finish. This does clash with some exterior colours, especially when butted up against the body-coloured door panels, but it does make for a lighter and less cramped-feeling cabin. If you’re upset by completely mismatched stitching, the pinky-red design on the steering wheel and handbrake and cream stitching on the seats and door cards will grate.