Sure to impress casual drivers, but may leave some wanting more. Plenty of body roll and some body shake, too 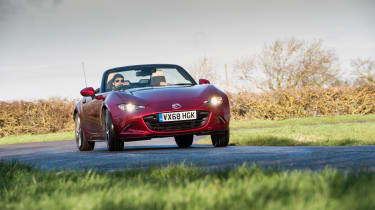 Much like its rivals the Toyota GT86 and Subaru BRZ, the Mk4 MX-5 has been passionately designed and developed around a theoretical concept: in this case, to offer interaction and a sense of speed and fun for everyone. As part of that, the car has been set to initially roll heavily when a steering input is made, and to lean on the outside tyres. The settings also cause it to pitch and squat a little more than you’d expect when the brakes and throttle are used too. This may well give a strong impression of speed, but it can be disconcerting because the initial impression is of a wallowing, somewhat vague car.

The MX-5’s real limits as a challenging performance car start to show when the going gets rough though. It’s all down to the chassis, which for all its lightness suffers in terms of stiffness, or rather the lack of it. Barrel down a broken B-road and the structure shudders and wobbles, as the chassis struggles to contain the impacts coming in from the suspension. 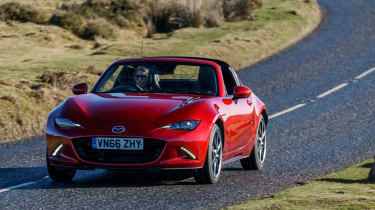 The springs really should iron out smaller bumps and road intrusions, but instead the brittle dampers transmit this noise into the cabin. Wheel control is also compromised, as the wheels have a tendency to crash into road irregularities.

This MX-5 is the first of its ilk to use electric power assistance for the steering, and while the engineers have succeeded in making it accurate, predictably it doesn’t possess the more natural weighting and progressive responses of the best hydraulic racks – or indeed its sweet-steering predecessors.

An acceptance of the car’s limitations, plus a calm, precise driving style, suit the MX-5 much better. Only 2-litre cars have the limited-slip differential (and a strut brace), as it’s the only one of the two that you’d expect to have enough grunt to worry the rear tyres. Actually, the excessive roll means that the 1.5’s inside rear wheel is easily unloaded and has a tendency to spin in tight corners, even in the dry.

The 2-litre won’t slide around extravagantly in the dry, and the large body movements soak up tamer attempts to unsettle the car, but if you’re committed enough, or on a circuit, it will transition into oversteer cleanly. The MX-5’s more potent top end also adds a new layer of throttle adjustability, the engine more easily overwhelming the rear grip threshold. 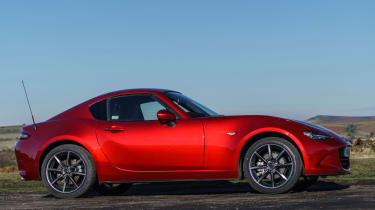 The soft suspension does make gathering the slide up a less elegant proposition though, and extreme forces can still confuse the chassis. This isn’t just an issue when being a hooligan; braking late, high cornering speeds and large amounts of throttle can also create a disjointed and scruffy driving experience. The lack of an LSD in the 1.5 means it is even more unpredictable if you do provoke it into a slide. Having said that, it’s possible to corner at neutral or mild oversteering angles at sane speeds in either version.

Dial back your efforts and calm your inputs and both can be very satisfying to drive, but it’s easy to push too hard and lose the rhythm that makes them so pleasing. On unfamiliar back roads, where you aren’t confident of the severity or direction of the next corner, where you need a car that will respond just as you expect, the MX-5 is in its element. Without committing to a corner too eagerly you can get on the throttle early to manipulate the rear axle and constantly adjust your line right through to the exit.

Sport specification brings Bilstein dampers on the 2-litre version, and this is undoubtedly the most potent machine in the range. However, they do make for a firm ride, which particularly on urban roads sends a tremor through the MX-5’s structure. In fact, all models – despite Mazda’s best efforts – betray their open body in the way they react to poor road surfaces, although the ride improves greatly at speed. The fancy dampers provide more control and allow you to drive the MX-5 harder, but it’s still possible to push it out of its comfort zone even on the road. 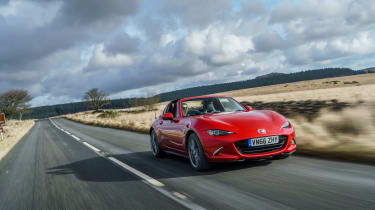 Mazda has gone to great lengths to make the RF feel exactly the same as the roadster to drive. The extra weight of the folding roof has been compensated for by using revised springs, dampers, anti-roll bars and rear suspension geometry.

The bulkier roof has also increased the car’s structural rigidity, but Mazda felt that it changed the balance of the car too significantly so one of the lower chassis braces has been altered to allow more twist. Despite sounding counter-intuitive, there’s no denying these changes have worked as it really does feel very much the same to drive.

Driving the two cars back-to-back reveals the RF has a slightly stronger shell. However, rough roads will still transmit vibrations into the cabin. It also resists roll ever so slightly more, but it really is practically identical to drive.