Naturally, some of that is down to the introduction of a 1.5-litre engine – the smallest yet in an MX-5, and itself a result of the lightweight body giving less mass for a smaller engine to push along. The upshot is combined economy of 47.1mpg and CO2 of 139g/km – the latter resulting in a first-year VED payment of £200 and £140 a year thereafter.

A year or two ago evo had the opportunity to spend 800 miles behind the wheel of a 1.5, touring the ring of Iceland. While hills and more twisting sections sapped away at the car's frugality, the car's touring economy still proved very impressive. Even driven at higher pace we often saw 45mpg between stops, and our average over some sections of road was as high as 54mpg. Be in no doubt, the MX-5 is not a gas-guzzler.

The brawnier, heavier 2-litre model isn’t quite as frugal on paper, but opting for the speedier car won’t empty your wallet at an eye-watering rate either. Combined economy drops to only 40.9mpg, with a corresponding increase in CO2 to 161g/km (£500 for year one VED and £140 in subsequent years). However, as you don’t need to rev the 2-litre as much and you don’t use full throttle as often as in the 1.5, the gap in mpg is much smaller between the two cars in real life. Our recent long-term MX-5 RF regularly returned figures in the 40s. 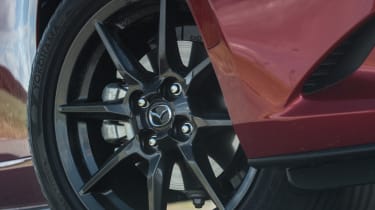 In theory, that low weight should have lasting benefits in other areas. Experience with our long-term RF suggests the MX-5 is unlikely to chew through tyres and brakes too quickly – a set of front pads and discs lasted us four trackdays and 13,000 miles of road driving, while the tyres still had life left in them by the end of our year with the car.

Other consumable items should be devoured at a similarly modest rate. Insurance should also be relatively low, though not as low as it could be if the little Mazda was equipped with some of the electronic safety systems that grant a full five-star Euro NCAP rating. The MX-5 instead gets four stars.