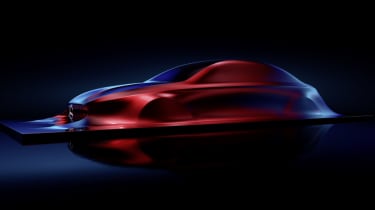 Mercedes-Benz has released images of a sculpture that should point towards the brand's future design direction - one that focuses on purity, rather than superfluous decoration.

The "Aesthetics A" sculpture takes the form of a typical four-door saloon car, so it could represent several future Mercedes model lines, from the compact CLA to the luxury S-class.

There are definite hints of the firm's current design language in the sculpture too, albeit more confident, more toned than existing production models. Less complex too, as Mercedes' claims of 'sensual purity' imply - the slightly odd scalloped sides of the existing CLA and C-class in particular are nowhere to be seen.

A confident, sharp shoulder line, which in current models fades in over the front wheel arch and fades out again before the rear wheel, now stretches the entire length of the car, appearing to start where the front light units would begin and ending at their counterparts at the rear. 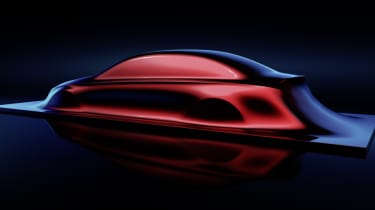 That line (known within the industry as a 'tornado line') slightly contradicts claims from Chief Design Officer of Daimler AG, Gorden Wagener, that 'the days of creases are over', as does a sharp edge to the boot, but it's undoubtedly a cleaner design than the company's current products.

'Form and body are what remain when creases and lines are reduced to the extreme,' says Wagener. 'We have the courage to implement this purism... the upcoming generation of the compact class has the potential to herald a new design era.'

That reference to compact class cars suggests that, as it did with the current generation of Mercedes-Benz products, the A-class and its ilk will be some of the first models to adopt the new style. Given the current A-class made its debut in 2012, it may still be a year or so before we see its replacement in production form.

Other notable elements of the Aesthetics A study are the colour - something Mercedes-Benz describes as 'a new signature colour' for the brand (so expect some future concepts to bear this shade, rather than the traditional silver) - and a more rounded grille design, more similar to the AMG GT than the company's existing saloon cars.