Mercedes has introduced a new 'Shooting Brake' estate version of the CLS, itself a 'four door coupe' based on the Mercedes E Class. Is the 63 AMG version a niche too far? 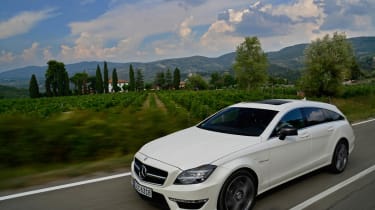 Under the skin it’s all very familiar mechanically. Like the bigger members of the Mercedes family the AMG version of the CLS Shooting Brake gets the 5.5-litre twin-turbocharged V8 rather than the (slightly) less powerful naturally-aspirated 6.2-litre. With the optional ‘power’ kit this produces a walloping 550bhp, with this delivered to the rear wheels via Merc’s clever MCT Speedshift transmission, which uses an electronically controlled clutch instead of a torque converter.

The 63 AMG Shooting Brake is 85kg heavier than its saloon sister, and 10kg heavier than the considerably more spacious E63 CLS Wagon. Despite that, Mercedes claims identical 4.4-sec 0-62mph times for all three cars. It also boasts 1550 litres of luggage space, although the relatively small rear tailgate (and the lack of height in the boot) mean it’s probably best considered a hatchback rather than a true estate.

You won’t be surprised to hear that it sticks closely to the script established by its peers. The bi-turbo V8 does the full Jekyll and Hyde, burbling happily at low revs but prepared to pull hard the moment you drop the hammer. There’s almost no turbo lag and the only real give away that the engine is force fed is its lack of enthusiasm to go much beyond 6000rpm.

The transmission works extremely well too, smooth in ‘comfort’ mode, intelligently rapid in ‘sport’ and aggressive in ‘sport plus’, with rapid changes when manually over-ridden. It’s an extremely good car for covering ground in, quickly and effortlessly.

Like AMG versions of the four-door CLS and E-Class, the Shooting Brake feels grippier and stickier than the hooligan C63. It can be pursuaded to slide if you can find a wide, open corner – but you’re never left in any doubt about its mass and size.

It’s niche status means the CLS 63 AMG really is a car without obvious rivals from other manufacturers. It’s £6300 more expensive than the more practical E63 AMG wagon, but only £1150 dearer than the CLS saloon – and you could pretty much drop that on a set of optional floor mats. As such, we reckon it’s almost a bargain.

Sales of petrol-powered execs are so slow in the UK that the 63 AMG will be the only petrol-powered version of the Shooting Brake. The other engine choices will be a four-cylinder 250 CDI and a six-cylinder 350 CDI.