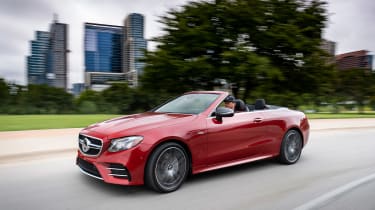 With no plans to produce an E63 variant of the E-class Coupe and E-class Cabriolet, the new E53 models are the closest you’ll get to a full-bore performance model in their respective ranges.

What they lack in tyre-smoking appeal and sledgehammer performance they should make up in sophistication, and as the latest recipients of the firm’s hybrid-assisted inline-six powerplant, there’s certainly the potential for thrills. 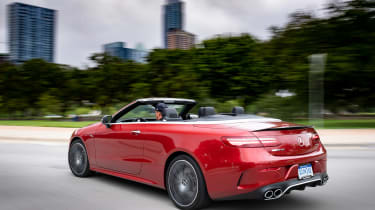 The standard transmission is a nine-speed AMG Speedshift automatic, and a 4Matic+ all-wheel drive system, with fully variable torque distribution between the two axles.

Top speed is limited to 155mph, while the 0-62mph sprint is seen off in 4.4 seconds in the coupe and 4.5sec in the cabriolet. Similarly, the coupe is slightly more efficient, recording 32.5mpg on the combined economy cycle to the cabrio’s 32.1mpg. CO2 is around the 200g/km mark. 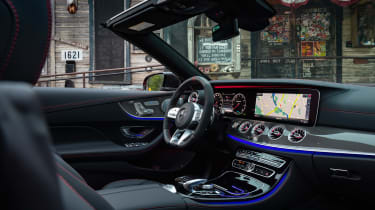 In addition to the EQ Boost setup, all E53s feature Ride Control+ multi-chamber air suspension, with springs and dampers tweaked compared to standard air-suspended Mercedes models to account for the higher performance application. The driver can control the behaviour further with the usual Dynamic Select switch, which has five standard drive modes, Eco, Comfort, Sport, Sport+ and Individual.

Cabriolets get a multi-layer roof whose opening and closing operations take 20 seconds, at speeds of up to 31mph. 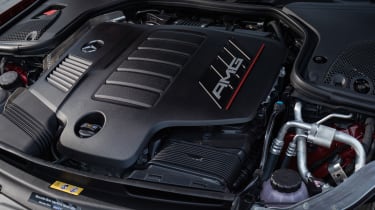 A not insignificant proportion of the satisfaction of driving an E-class coupe or cabriolet comes from knowing you’re in what must be one of Mercedes’ most visually attractive current models.

That’s even more the case in the E53, which gains a set of 19-inch alloy wheels and a wider track - 61mm at the front and 50mm at the rear - as well as quad tailpipes and a subtle spoiler. It’s more menacing as a result, but not overtly so, and the overall shape remains as well-proportioned as ever - though it’s perhaps at its best in pillarless coupe form, rather than on the cabriolet we test here. It’s a similar story inside, with an attractive cabin and high-quality materials, enhanced by the addition of an AMG three-spoke steering wheel and figure-hugging seats.

The inline-six fires to a quiet idle, with just the hint of a rasp to each blip of the throttle. The hybrid EQ boost system shuts the car down each time you pull to a halt, but unlike some conventional stop-start systems it neither feels intrusive nor out of place here. And when the engine is spinning, it’s silky smooth and strident all the way to the red line, the nine-speed auto shifting swiftly (whether left to its own devices or actuated with the paddles) and that quad exhaust bubbling and crackling off-throttle. 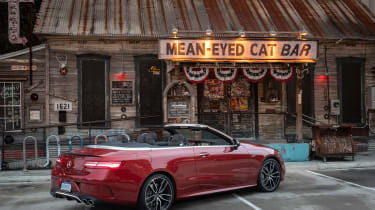 It doesn’t feel significantly better endowed than the old V6-powered 43 it effectively replaces, however. Performance might be described as “purposeful”, and enjoyment comes more from the strident engine note and crisp throttle response than it does from pure speed. It’s certainly less likely to trouble your driving licence than AMG’s V8 models, and the 53 definitely feels more like a particularly healthy blue-blooded Benz than a proper Affalterbach hot-rod.

That impression carries over to the ride and handling, which is set a few notches back from something like the E63 saloon. Harsh bumps will send a thump through the shell (though the Cabriolet remains admirably free from shimmy) but otherwise it’s nicely judged - firm, but pliant over most surfaces. Body roll is kept to a minimum too, and Mercedes still gives you better steering than BMW or Audi - responsive, accurate and well-weighted, with just enough feedback to satisfy your fingertips.

Grip and traction both feel endless on dry, smooth roads, and while that does mean the E53 feels less playful than AMG’s heavy-hitters, the extra security suits the slick-feeling drivetrain and restrained exterior styling. Like the 43s found elsewhere in AMG’s range, it’s a car you’ll learn to appreciate day-to-day, rather than a single-hit adrenaline rush of the kind AMGs are typically known for. 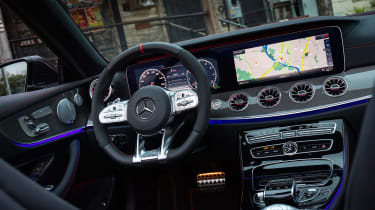 The E53 Coupe comes in at £64,790, while the Cabriolet begins at £69,285. To this buyers will be able to add several options packs, including the £2595 Premium Plus package with Burmester audio and a panoramic sunroof (it’s £1595 on the cabrio, which obviously lacks the provision for the sunroof…), and a £1695 Driving Assistance Package with a multitude of safety systems for aiding, stopping and steering you away from various hazards.

Audi’s RS5 is a compelling alternative, lacking the suave luxury feel of the Mercedes but performing even better for less outlay, though it does lack a convertible variant. It’s another car that draws you in the more you drive it, but the AMG is more engaging.

You might also consider Mercedes-AMG’s own CLS 53 if you’ve got your eyes on the E53 Coupe in particular. Performance is similar and the price, at £74,050 is higher, but the CLS’s distinctive styling and extra practicality may be enough for some.