The Mercedes-AMG E63 used to be the ideal German muscle car to sit in the fast lane of an Autobahn, scaring other cars out of its way as it dispatched hundreds of miles with a plush interior, comfortable seats and a distant rumble from its oversized V8 engine in front of you.

No one seems to have told AMG’s engineers that though, because as well as those attributes, Merc’s current E63 S is as gifted down a tortuous B-road as it is on a derestricted highway. It might well be big and heavy, but it’ll move with the agility of a car 600kg lighter while being genuinely entertaining in the process

Its vast range of abilities can be partly attributed to its decoupleable four-wheel-drive system, something that has since been mimicked around the industry in rivals such as the BMW M5. It’s a trait that stops the E63 S AMG from just falling into the mould cast by previous generations, and one that helps it be a deeply desirable do-it-all performance car, rather than just an overpowered E-class.

The range has been condensed since its initial launch in 2017, dropping the 576bhp ‘standard’ E63 in favour of offering a single, highly specified 603bhp E63 S, available in both saloon and estate forms. It’s an expensive object at nearly £100,000, but then so has the supersaloon caste risen to the same threshold. 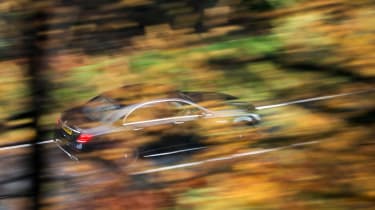 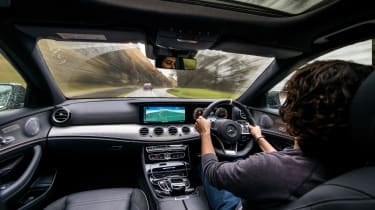 Mercedes-Benz's simplification of its model ranges has spread to the flagship E-class, with the V8-powered E63 now available in 603bhp S form only. This, together with the broad kitchen sink approach to the standard specification, has raised the E63 S’s price to £95,440 in saloon form (the estate is just £2000 more at £97,440). This might seem like a faintly preposterous hike from the £80,000 price tag the E63 started with in 2017, but it comes with quite literally every option ticked.

Equipment highlights include standard 20-inch wheels, a Night Package that removes most external brightwork and replaces it with gloss black elements, and the Premium Plus pack that bundles a panoramic glass roof, Burmester hi-fi, Multibeam LED headlights, 360-degree parking camera, a full suite of active driver aids – we could go on.

If spending near-six figures on an E-class sounds crazy, it is worth mentioning the E63 S’s key rivals also operate in the same pricing bracket, with BMW’s M5 Competition sitting a few thousand more at £96,205 and Audi’s RS6/7 extending way into six figures. The BMW is arguably even faster than the AMG, with its 616bhp twin-turbo V8 pumping out slightly more power, but then is metered out with less torque.

Audi’s new RS6 and RS7 are split between three trim levels. Entry RS6 Avants start at £92,790, rising to £109,290 for the fully loaded Vorsprung. RS7 models are around £4000 more trim-for-trim. Both Audis also have less power at 592bhp, but neither could be mistaken for slow and are more dynamically capable than ever before.

The Porsche Panamera operates at a higher price point, sharing its six-figure tags with AMG’s own GT63 S, which is now the thick end of £140,000