The Mercedes CLK received excellent reviews, is usable and so could prove to be a sound investment as well as a lot of fun to drive 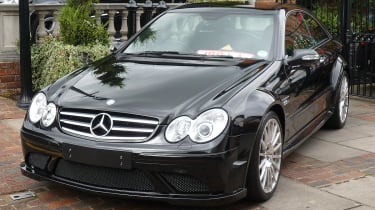 The CLK Black Series was undoubtedly the surprise package of eCoty 2007. The cloth-trimmed, fixed-backed Recaros seemed to be promising too much in a Mercedes, but they weren’t – it finished a hugely impressive fourth, just behind the GT3 RS, 430 Scuderia and Audi R8. After Clarkson gave it a boost one Sunday evening sometime later (he even bought one) sales proved strong too.

Sitting on the forecourt at Bramley, this Obsidian Black example looks wonderfully understated. Apart from the couple of small carbonfibre additions and the shiny wheels, it could slip unnoticed through traffic. Bramley are about to have the front bumper and rear arches repainted as they tend to succumb to stone chips, and once that’s done it will look factory fresh. Inside, the seats, carbon door cards and the tiny, non-circular steering wheel give a suitably motorsport feel.

With just one owner and only 4000 miles on the clock it is no surprise that the driving experience is as good as new. The ride is firm pottering through town, but once you open up the V8 the CLK seems to shed weight and start floating over the surface of the road. It’s hard to think of another car that you can steer so easily with the throttle. The only negative is the paddle-shift auto, which still feels sluggish to respond.

While people are bailing out of their orders for the ludicrously expensive SL65 Black, a second-hand CLK looks like a good buy in comparison. It’s a limited edition, it received excellent reviews, and it’s usable to boot, so it could prove to be a good investment as well as a wonderful car to own.

• ExteriorThe wheels are unmarked, and once repainted the bodywork will be as good as new too• InteriorSome people still think that AMG should have left the back seats in…• MechanicalsEngine feels strong and subsequent iterations show it isn’t stressed in this state of tune• Should I buy it?The price is right and past TLC makes this one a pretty good betFOR: Wonderfully easy to steer on the throttle – AMG at its bestAGAINST: Auto gearbox. Too understated for what was a £100K car new?