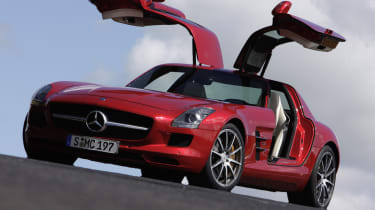 A day after the full reveal of McLaren’s new supercar comes the response from Mercedes, its new SLS AMG coupe.

The two firms have worked together for several years, producing iterations of the Mercedes McLaren SLR, but have since split their road car divisions and have ended up unveiling their 200mph, £150K supercar sparring partners in the same week.

Unlike the MP4-12C, the SLS AMG will get its world premiere at the 2009 Frankfurt motor show, and it looks set to star on its home turf.

It takes much inspiration from the classic 300SL Gullwing, with the body shape, distinctive doors and much of the exterior detailing linking back to the original of the 1950s.

It’s got a classic front-engine, rear-wheel-drive layout, although the powerplant sits behind the front axle. At the Merc’s heart is a 563bhp/479lb ft version of AMG’s normally aspirated 6.2-litre V8, which is significantly modified over normal, justifying an internal renaming. Mercedes still insist on putting 6.3 badges on the side, mind…

The engine comes mated to a seven-speed multi-clutch automatic gearbox, with the obligatory paddles behind the steering wheel. It has six clutches, packed into two lots of three, which sounds tremendously complex but does help the SLS gets its power down off the line successfully. There’s a number of different modes for the ‘box, too, ranging from one majoring on economy to ‘Race Start’. Shift times are as low as 100 milliseconds.

Performance figures are predictably sharp – an electronically limited 197mph and a 0-62mph sprint of 3.8sec, the latter particularly impressive given the SLS AMG’s 1620kg weight.

That’s despite it being the first road-going Mercedes to be structured and panelled entirely in aluminium, with the suspension (double wishbones) and steering arms made of the same material.  To aid the car’s weight distribution, the transmission is mounted with the limited-sip diff at the back of the car, leading to a 47/53 front/rear mass spread, close to the 43/57 of the McLaren.

The two will go head-to-head with matching price tags around the £140-150,000 mark. The Ferrari 458 Italia will look to rough the pair up, too. We look forward to refereeing.

You can read in-depth looks at both the McLaren MP4-12C and the Mercedes SLS AMG in Issue 136 of evo, on sale Weds September 16.