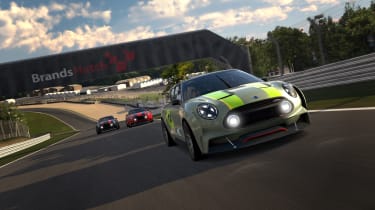 The latest generation Mini range won’t be quite as saturated as the outgoing range, but the company still has a remarkable ability to spin several different models off the same platform.

One we won’t be seeing – on the road, at least – is the Mini Clubman Vision Gran Turismo. The latest car to be announced for Gran Turismo 6 on the Playstation 3, it’s the most extreme Mini concept yet.

With little requirement for roadgoing feasibility with Vision Gran Turismo concepts such as those released by Alpine, Subaru and Mercedes-Benz, Mini has gone to town on the Clubman’s powertrain.

The engine – of unconfirmed displacement and cylinder layout – produces 395 metric horsepower (390bhp) and sends its output through a six-speed paddleshift sequential gearbox to a permanent all-wheel drive system. The upshot is a 0-62mph time of 3.5 seconds and top speed of 180mph, depending on gearing – eminently adjustable in the game.

Styling is – given equally lax constraints – far more aggressive than anything we’ve seen from Mini so far.

While very visibly a product of the Mini brand, the car displays a hunkered-down, ground-hugging stance thanks to a wide track front and rear, massive 22-inch alloy wheels, a deep front air inlet and huge pumped-up arches. 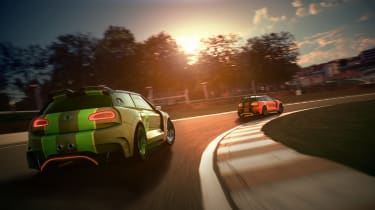 Carbonfibre splitters surround the front and sides of the car while a rear carbonfibre element serves as the Mini’s diffuser – accented by an LED brake light strip. Also notable at the rear – aside from rear light elements not unlike those appearing on the eventual production Clubman – are the twin exhaust pipes, protruding from the centre of the bumper.

LEDs feature at the front too, designed to evoke the black cross of tape used on historical race cars to prevent the lights shattering if hit by stones or in collisions. These LED units flank the traditional Mini grille, which also carries two spotlights similar to those on the Touring Superleggera Vision roadster.

If the design can be criticised, it’s that it still looks more or less like ‘a Mini’. Despite the clean sheet approach taken by other manufacturers tackling their own Vision GT projects, Mini continues to paint itself into a corner by adopting familiar tropes – something Touring Superleggera managed to avoid with its own recent concept.

Nevertheless, the Clubman Vision will make an interesting addition to the game, and is available now as part of the latest update to Gran Turismo 6.