We drive the new Mustang and Focus RS, follow Japan's touge runs in a Cayman GTS and revisit the E46 M3 CS 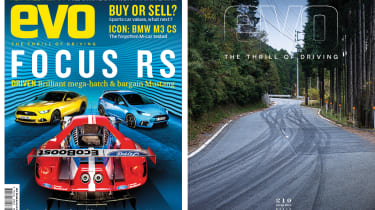 12 months ago you couldn’t move for fast Ford news. A new Focus RS, a new Mustang and a new Ford GT were dominating the headlines and occupying all our time as we worked on ever more elaborate ideas to convince Ford to let us have a go in its trio of new cars. And in the new issue of evo, on sale now, Ford has thrown us the keys to the most exciting cars of 2016 (ok, we couldn’t drive the GT Le Mans racer, not yet anyway). 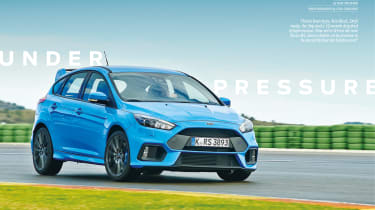 You’ve read Dan Prosser’s first drive of the Focus RS on www.evo.co.uk, but in the March 2016 issue evo’s Road Test Editor expands further on Ford’s most powerful and potentially most exciting hot hatch ever. Quite a claim for a company that gave us the Escort Cosworth. 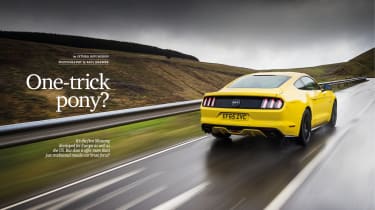 On paper, the idea of a front-engined coupe with a 410bhp V8 driving the rear wheels through a manual gearbox sounds like the perfect antidote to 2016’s turbocharged, torque vectoring, flappy paddle Euro-clones. How, then, does Ford’s new right-hand drive Mustang 5.0 GT stack up in the real world? We dispatched Contributing Editor Jethro Bovingdon to a very wet Wales to find out. 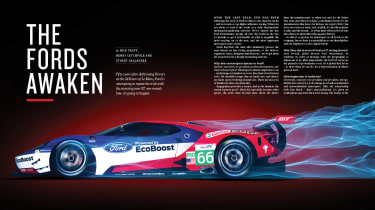 Half a century ago England won the football World Cup and Ford finished 1-2-3 at Le Mans. In 2016, England will once again be part of an international tournament it has no hope of winning and Ford will return to Le Mans… Editor Nick Trott sits down with those responsible for bringing the new Ford Performance team together to ask if Ford can win at Le Mans again. 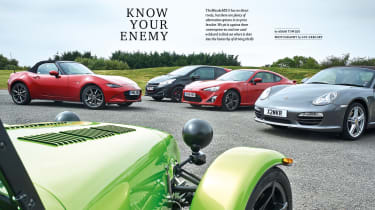 Issue 219 also sees us pit Mazda’s MX5 roadster against its toughest new rivals in the shape of the Toyota GT86, Caterham 270S, Peugeot 208 GTi by Peugeot Sport and a used rival in the Porsche Boxster 987 2.9-litre. Can Mazda’s lighter, more focussed two-seater pick up a victory or two in this toughest of groups? 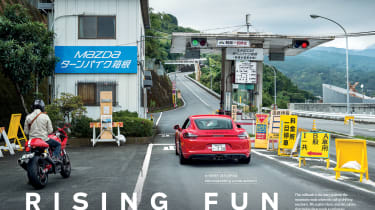 What else will you find in the new issue of evo? Features Editor Henry Catchpole heads to Japan with a Porsche Cayman GTS to trace the origins of drifting, Jethro Bovingdon reacquaints himself with BMW’s E46 M3 CS to ask if it’s as good as he remembers before heading to the Lausitzring to pit Porsche’s quartet of 911 GT cars – GT3, GT3 RS, Cup and RSR – against each other. It’s a tough life etc, etc. 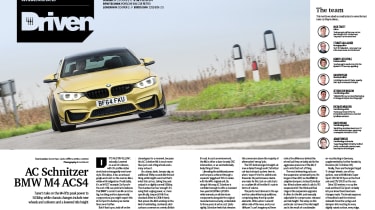 Then you've got a deep dive look at BMW’s new i8 Spyder Vision Concept, a first drive of AC Schnitzer’s BMW M4 ACS, KTM’s X-Bow GT4 and Birds 335d B3x-3.5. But it doesn't stop there, we've also got an investigation into the market values of performance and super cars in 2016 as well as columns from Richard Porter and Dario Franchitti, our Fast Fleet and a unique buying guide (the Toyota GT86 & Subaru BRZ this month). There’s literally something for everyone in the March 2016 issue of evo. 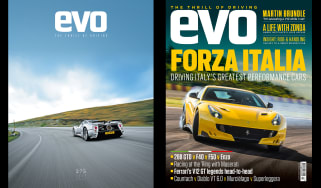