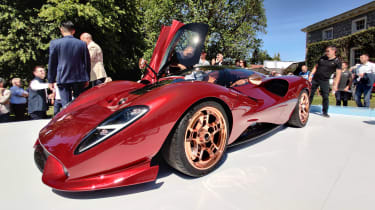 Back in the summer De Tomaso unveiled its all-new supercar, the P72, a homage to the little-known collaboration between company founder Alejandro De Tomaso and Carroll Shelby, the P70. Despite being unveiled in all its glory at the Goodwood Festival of Speed details were scant at the time, especially regarding its powerplant, but now De Tomaso has revealed for the first time some more information as to its engine.

The decision to reveal the P72 without much information for prospective purchasers was a conscious one according to De Tomaso’s CEO, Ryan Berris. “In our opinion the market is now over-saturated with commercially driven ‘limited edition’ models primarily marketed on performance metrics. We have grown tired of this notion and thus took a contrarian approach with the P72. A stark contrast in almost every aspect of today’s market, the P72 is a true ‘Modern-Day Time Machine.’ A car that has been oversubscribed without revealing any performance figures, nor disclosing the engine.”

De Tomaso enjoyed a long and fruitful relationship with Ford – the Vallelunga, Mangusta, Pantera, Deauville, Longchamp and Guarà all featured powertrains from the blue oval – so to keep the historical thread alive the P72 will use a Ford V8 that’s been thoroughly reworked by Roush Engineering. Its basis is a 5-litre 90º V8 paired with a Roush roots-type supercharger to give ‘at least 700+bhp’and over 609lb ft of torque with a maximum engine speed of over 7500rpm.

Precise figures will be revealed at a later date but De Tomaso claim its V8 and supercharger set up offers enhanced thermal efficiency, higher volumetric capacity, higher operating speeds, increased efficiency of airflow into the engine and improved noise and vibration characteristics. Perhaps most importantly it reckons the supercharger set up offers a substantial increase in reliable power and also helps retain the character of a naturally aspirated engine. 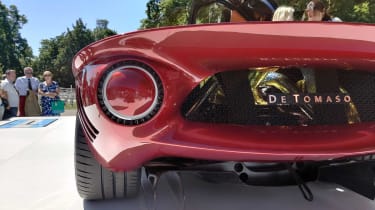 And that’s obviously a primary concern for De Tomaso as it also says it has concentrated much of the development to ensure that the supercharged V8 retains as much character as possible with an old-school American V8 soundtrack, evoking memories of the 1960s muscle car era while ensuring silky smooth refinement. Another hark back to that time will be De Tomaso’s insistence on a six-speed manual transmission as opposed to a dual-clutch set up, while turbocharging or a hybrid set-up has also been deemed to be out of the question.

Further details remain as they were when the car was reveled at Goodwood. Its chassis is based on that of the Apollo IE. The IE has been breathed on by HWA, the firm behind the Mercedes-Benz CLK GTR, and its chassis’ subframe and crash structures are FIA-safety compliant, which means the new De Tomaso has a pretty solid backbone no matter what powers it. 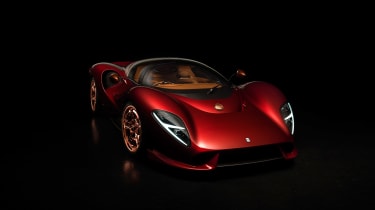 The Apollo link is no coincidence, both it and De Tomaso are owned by the same parent company, Ideal Team Ventures (ITV). ITV bought the rights to De Tomaso in 2014 and has been plotting its return ever since. While the Apollo IE is fresh take on the GT1 racers of the 90’s, the P72 looks further back to the heyday of prototype racers. Ryan Berris, General Manager and CMO, comments: “A similar way the Pantera created a new category when it debuted in 1970, the P72 will create a new benchmark of its own. We have created a modern-day time machine that pays homage to an integral part of history and a car with its own provenance.”

The firm’s new owners are committed to reinvigorating and celebrating the marque’s past. Chairman Norman Choi said: “We took our time, we digested, we read, we studied. We learned more and more about Alejandro and the incredible achievements that he had attained. In reality, when most people hear the word De Tomaso, the only thing that comes to mind is the Pantera. This is a true icon and the most successful car of the brand. However, our approach is not solely product driven, it is driven by history and the brand.

The firm admits that when it took control of De Tomaso it didn’t know the P70 was part of its heritage, but since discovering the car, the idea of a modern recreation has taken shape. P70’s story is one worth celebrating – a 1964 prototype racer tie up between Carroll Shelby and Alejandro De Tomaso designed to take on the world’s greatest. 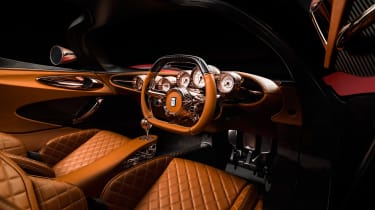 The ‘P’ in the name is related to the car being a prototype racer, but the ‘70’ is a result of De Tomaso upping Shelby’s Cobra engine to 7.0-litres. Peter Brock designed it, Shelby funded it, and De Tomaso engineered it. It could have been a wonderful thing, but Shelby and De Tomaso clashed after Shelby sent Brock to oversee De Tomaso’s work. De Tomaso was angered by an apparent lack of faith in his skills and the relationship broke down. Shelby was headhunted by Ford to make the GT40 fulfil its potential, and De Tomaso carried on working on the car with the help of Ghia. In 1965 the Ghia-De Tomaso Sport 5000 was unveiled at the Turin Motor Show. The finished car didn’t find racing success, but its running gear ended up in the Mangusta road car.

The De Tomaso P72 doesn’t only share a chassis with the Apollo IE, but a designer as well: Jowyn Wong. Wong’s company, Wyn Design, partnered with De Tomaso to create a modernised, idealised 60’s design to launch De Tomaso to a new automotive landscape. He commented: “We intentionally incorporated a distinctive aerodynamically optimized body for performance and to modernize the aesthetics, while the classic wing mirrors and front emblem cap pay homage to the P70.

“Beneath the surface, the interior showcases an elaborated combination of design and exotic materials. Polished copper and diamond pattern detailing adorn the cabin, fashioning a true sense of drama and occasion. The classically designed switchgear and circular analogue display dials take inspiration from the timeless design themes of the 60s and 70s era.”

Fully finalised prices and spec will be revealed soon.