"The V6 is the engine world's constant disappointment"

The worst engine layout ever to grace an engine bay? Porter has a convincing argument for a perhaps unexpected choice

When he was still evo guv’nor and before he went to live in a garage, Harry Metcalfe once let me drive his Ferrari 550, listened patiently to my enthusiasm for it, and then sagely observed that ‘there’s nothing like a V12’. He was right. I was thinking this again recently while driving an Aston Martin Rapide, which is an easily overlooked but deeply loveable car with looks to make you swoon and the dynamic chops to be fun. Most of all, it has a V12 that is rich and torquey at the bottom end and wonderfully, wailingly powerful at the top. It’s a delight, as V12s tend to be in all their forms, from the sleeping baby silence of an old Jag XJ12 to the howling wolf heroics of a Lamborghini Aventador. They may be big and juicy but the V12 could be the greatest engine format in the world. So here’s a trickier one: what’s the worst?

Actually, that’s easy. It’s the V6. No, really. Put it this way, can you think of anything worse? Let’s work through this, starting at the bottom. The worst engine isn’t the one-cylinder because I find the noise made by dumper trucks amusing. I probably wouldn’t if the same engine was in a car, but that never happens so let’s move briskly on to two cylinders, in the flattened format of a 2CV or the in-line layout of the current Fiat TwinAir. Either way, a delightful, fluttery soundtrack comes for free, giving these engines real personality. Also, by being tiny yet gutsy they have a quality that’s as desirable in a little engine as it is in a small dog; they’re plucky. The same applies to in-line threes.

> Click here for our review on the latest Jaguar F-Type

Which moves us on to in-line fours, one of the most common engine formats and sometimes the most reviled. Disdain for the straight-four is understandable when you remember some of the joyless sloggers fitted to family cars 30 or 40 years ago, but when it’s good, the humble four can be terrific. Ford BDA terrific. Honda K20A terrific. Vauxhall 20XE terrific. Like beer, pop music and the line-up of the Spice Girls, the four can range from absolutely delightful to utterly ghastly, and all points in between. This doesn’t apply to boxers and flat-fours, which are usually just delightful. 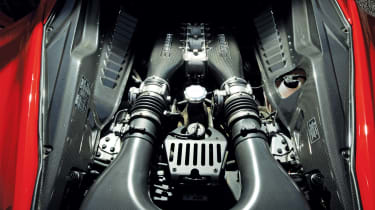 Likewise, in-line fives, which sound nice and pull well. Even the diesel one that lived for a while in some Land Rovers. And these qualities also apply to the five’s conjoined cousin, the V10. It’s a bit weird, a bit lumpy, but there’s something lovely about this layout, especially if it’s in a Carrera GT and sings like an early ’90s F1 car.

We’ll skip over sevens and nines, since no one experiences those unless they drive a radial-engined aeroplane, and split the difference with the eight. Sadly, we’re unlikely to see the straight-eight in a car again, since meeting crash regs alone would make the car 100-feet long, so our eight experience is in a vee shape. And V8s are brilliant. From the last M3 to the original Range Rover, the Ferrari 458 Speciale to the Pontiac GTO, the V8 can be sporty, it can be civilised, it can be a slugger. It’s hard to think of an angled-eight engine that isn’t full of personality, and probably quite a lot of torque. If you’re bored of V8s, you’re bored of cars. And, most likely, of life.

Which brings us back to six cylinders. The straight-six, of course, is a thing of wonder. From the hollow blare of an old Jag XK to the rich, bassy sound of one of BMW’s finest, the straight-six is a marvellous thing. It’s smooth, it’s hearty, it has real character. In fact, it has everything the V6 lacks. Go on, name a great V6 engine. That’s right, the ‘Busso’ V6 from Alfa Romeo. That’s all anyone can say about great V6s. What else? Maybe the ‘Dino’ engine from the eponymous not-Ferrari. And then, I fear, we’re all done. There are lots of V6 engines in the world, but how many of them are memorable or loveable or sound joyful? Very few. Even the gravelly lump in the nose of an F-type is just an average singer with one hell of an autotune unit. At least a supercharger saves its arse from that other V6 failing, which is the limp bottom end. And this is from stuff coming out of respected Euro and Japanese car makers. Don’t even get me started on those awful V6s you find in rental-spec American SUVs, which come in some weird capacity like 4.1 litres yet boast just 117bhp and a permanent tingle through the toe board.

The V6 is the engine world’s constant disappointment and internal combustion’s eternal low-achiever. For every other commonplace engine layout you could spend all day thinking of great examples of the art. With the V6 you’ll keep mumbling Alfa Romeo and then give up. It’s simply not good enough, and that is why the V6 is the world’s worst engine format.

Of course, there is one sure-fire way to fix it. Simply weld two together to make a V12.

Richard Porter is evo's longest serving columnist and the pen behind sniffpetrol.com