Polestar 1 review - can it compete with pure combustion counterparts?

One of the most appealing electrified vehicles on offer from any manufacturer, but not without its flaws 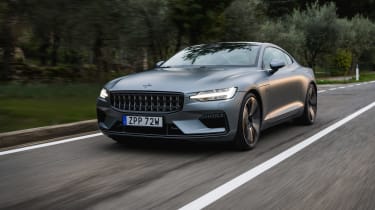 It started as a Volvo concept, and now it’s the first production vehicle from one of the newest players in the electrified vehicle game.

We first saw the Volvo Concept Coupe back in 2013, and it’s a credit to Volvo that six years on it’s not just hit the road basically unaltered, but if anything looks even better than it did back then.

The biggest change is the name: it’s no longer a Volvo, but the Polestar 1. Polestar 2 will join it in time (a kind of high-rise saloon, and a pretty attractive one at that) but this is the first indication of what the brand will be capable of. Polestar has nailed the design, and with a 601bhp drivetrain high performance is a given – but does it appeal as a driver’s car?

The Polestar 1 is a hybrid, an arrangement chosen because it makes the most sense given the car’s grand tourer billing.

The components themselves include a twincharged 2-litre petrol four-cylinder – that’s turbocharged and supercharged – making 305bhp and 321lb ft, combined with a 67bhp, 119lb ft electric motor squeezed between the engine and gearbox. This set-up powers the front wheels.

At the back are a pair of 85kW electric motors, delivering a combined 229bhp and 354lb ft. Each motor drives through a planetary gearset to enable full torque vectoring, overdriving an outside wheel when necessary to improve the car’s cornering behaviour. Volvo quotes a combined output of 601bhp and 738lb ft.

The car features two battery packs, one in the transmission tunnel and the other over the rear axle, for a combined 34 kilowatt hours – good for a claimed 78 miles of EV-only range on the WLTP cycle. Accelerative performance is strong, with a 0-62mph time of 4.2sec. Top speed is limited to 155mph, or 100mph in pure EV mode. 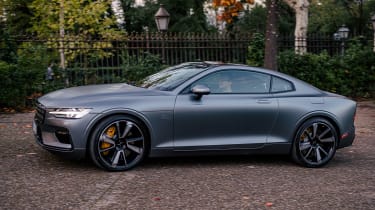 Like most hybrid vehicles the 1 starts in silence, and a couple of nudges of the crystalline gear selector puts the car in drive. The default driving state is Hybrid, which allows the engine to fire up should you call for a healthy dose of speed, but there’s enough pure EV performance that most Hybrid driving should be possible on electric power alone. In this state the car is rear-wheel drive, which can make for some entertaining handling characteristics, more of which later.

Rotate the knurled selector to Performance mode and both the four-cylinder and EV components are permanently activated. The 1’s accelerative ability is storming – stand on the throttle and the EV punch is instant, giving the internal combustion parts just enough time to deliver their own wallop of power and torque before launching you down the road.

Unless the road is perfectly smooth there’s actually a hint of torque-steer. The predominant sensation though is deep-chested, V8-style power, accompanied by an appealing cocktail of sounds – turbo spool, a thrummy flat-four-style note (quite different from the usual drone of Volvo’s four-cylinder motors), and hybrid whirr that’s difficult to differentiate from the supercharger whine. As with BMW’s i8, the Polestar 1 shows that hybrids can have as much aural character as conventional combustion vehicles. 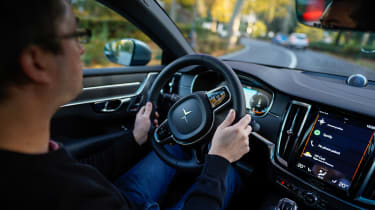 It would be uncharitable to describe the Polestar 1 as simply a two-door Volvo S60. While it’s indeed based on the same Scalable Product Architecture platform as Volvo’s products, it also features a carbonfibre body structure, the first time the group has dabbled with the tech.

Significant structural stiffness has been achieved with a carbon crossmember under the car that Polestar calls the ‘dragonfly’, which increases rigidity by 60 per cent and also acts to transfer rear crash impact forces – which would otherwise force the battery to move – through to the front crash structure. Clever stuff. Above all, the carbon-rich structure is 230kg lighter than an all-steel arrangement (just as well, given the Polestar 1 still weighs 2350kg), and has a lower centre of gravity.

Contrary to expectations, the Polestar 1 doesn’t use adaptive dampers either, but manually adjustable Öhlins units – something the car has in common with the old Polestar V60, before the brand was redirected to be Volvo’s high-end, electrified brand. 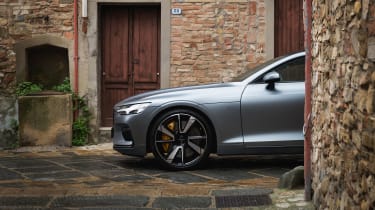 It seems appropriate to take in some of the Polestar 1’s surprise and delight features before actually going anywhere in it, because the overall vibe of the 1 is of a kind of bespoke, custom-built vehicle rather than a mass-production car.

The interior is much like that of the S60, but climbing in you’ll notice a small strip of carbon inscribed not with flashy brand graphics but technical details of the car’s carbon construction.

The sticker is replicated on the front wings behind the wheels, and when you open the boot you’re presented with the EV equivalent of a supercar’s transparent engine cover: a bank of bright orange electrical connections, each labelled with its purpose. If you get a kick out of engineering it’s a neat touch, though it does make painfully aware how little boot space is available…

As well as the aural character mentioned earlier, there’s dynamic character too. Not all of it is welcome. Polestar CEO Thomas Ingenlath smiled as he regaled stories to us of Volvo engineers’ concern at the firmness of the car’s ride quality, but there are times when traversing particularly rough sections of the Italian test route where a little more comfort wouldn’t have gone amiss. The 1 is well damped, but certain bumps do make it past the suspension, through the soft seats, up your spine and register with a thud at the base of your skull.

The firmness does work wonders for body control, and combined with ample grip, a wide track and torque vectoring the coupe hides its weight very well – it’s almost like an even heavier Nissan GT-R in its ability to overcome its mass. Turn-in is positive too despite a relative lack of feedback, and if you’re in the sportiest mode, the torque vectoring makes the car feel a little like it has four-wheel steering, tightening your line without actually leading to oversteer. 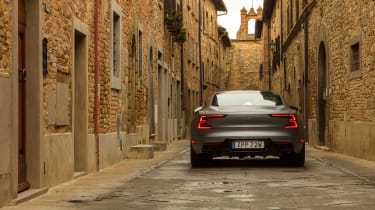 Curiously, you’ll get more of that in hybrid mode – with only the electrically driven rear wheels active most of the time, squeezing too hard on the right-hand pedal can quickly overwhelm the rear tyres. You’ll be glad for the stability control, as physics quickly takes over once the rear axle starts to go. Driven smoothly though, the Polestar 1 can make rapid progress – this is a car that’s more satisfying to drive a couple of notches back from maximum attack.

And as a cruiser, it’s truly lovely. Like many electric vehicles, the lack of engine noise tends to highlight other sounds, but Polestar has kept most noises to a minimum. The tyres can hum on some surfaces and there’s an ever-present motor whine, though some of this will be toned down in full production spec.

The Polestar 1’s technology and performance do not come cheap – UK pricing is quoted at £139,000. It remains to be seen how buyers respond given the brand is relatively new to the market, but when you add up the carbon technology, the hybrid drivetrain and high-end components, it’s also easy to see where the money has gone.

As such an unusual proposition it’s difficult to pick any one car as a direct rival for the Polestar 1. Hybrid technology brings to mind the BMW i8 (£115,105) and Honda NSX (£144,825), but each car is very different in character. Given the GT billing, cars such as the Aston Martin Vantage (£120,900) might be considered, but so different are the cars in execution that few will cross-shop.

But as one of the few electrified vehicles released recently that isn’t an SUV, there are sure to be a few buyers who appreciate the Polestar’s technology, and find it all the more appealing that it’s wrapped up in such a handsome shape.