With only 4400 miles on the clock, it could be one of the most original examples on sale 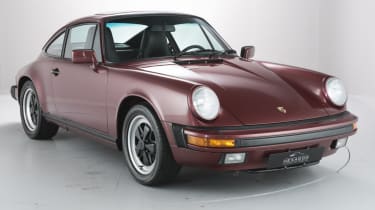 Not so long ago, 1980s Porsche 911s represented the least expensive ways of getting behind the wheel of Porsche’s rear-engined icon.

Today? Not so much, as this 1985 3.2 Carrera Coupe on sale with Hexagon Classics ably demonstrates.

Not many will have covered so few miles, admittedly – this left-hand drive car in garnet metallic has seen only 4428 miles pass under its wheels in the past three decades.

It makes a fair claim for being one of the best examples available, even if left-hand drive might be a turnoff for some buyers. The car was originally ordered from Porsche America, but has covered remarkably few miles.

Its condition is a testament to garaged storage and a stack of service invoices, and it’s as close to a new, original car as you’re likely to find.

3.2 Carreras were the last wave of 911s before the more sophisticated 964 generation debuted in 1989, and as such features distinctive details such as the ‘impact bumpers’ (much derided at the time, oddly cool today) and forged Fuchs wheels. 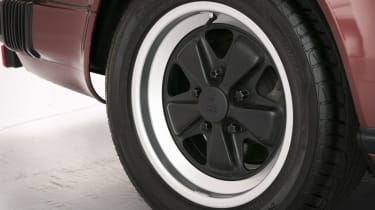 Power is nothing special by modern standards – its 207bhp at 5900rpm output is about what you’d expect from a hot supermini – though a 6.3-second 0-60mph time illustrates the benefits of rear-engined traction.

And no supermini boasts a soundtrack like an aircooled flat six, so it’s not all about the outright performance. Pleasant though it is, few will covet a Fiesta ST200 as they might an old 911.

Other details of this particular car include a black leather interior, air conditioning, electric windows and cruise control, with a period Blaupunkt Tucson stereo taking centre stage in the dashboard.

It also – notably – lacks the Turbo-style whale-tail spoiler besmirching the classic 911 lines of so many contemporary Carreras. It’s always quite refreshing to see one without.

So it comes down to money, and the £84,995 price tag. There’s no way around it – that’s a lot of money, even given the ever-increasing prices of this era of 911. With such low mileage though, it’s in a market all of its own.